Directed by Jacques Doillon
An engaging cross-cultural drama set in Morocco about a middle-aged Frenchman's yearning for a 19-year-old local girl who works in his garden.

Writer and director Jacques Doillon has set this very engaging film in post-colonial Morocco. Middle-aged Fred (Pascal Greggory) lives alone on a luxurious estate; his wife left him long ago, and two elderly women (Oum El Aid Ait Youss and Zineb Ouchita) cook for him and take care of the house. When he first spots 19-year-old Raja (Najat Benssallem), she is working in the garden with several of her friends. Her sexuality and alertness to his yearning for her turns him on, and he begins a campaign to seduce her. Since Fred does not understand much Arabic, Raja ridicules his appearance and old age, much to the delight of her companions. One of them states: "Now you have the boss around your little finger and under your thumb." They all immediately speculate how Raja's life would be transformed if she were to marry such a rich man. When Fred shows a photograph of Raja to one of the old women and asks for her opinion, she says that the girl is not a beauty and looks like a ruffian who cannot be trusted.

This evaluation is not far off the mark. Raja is an orphan whose brother looks after her and will decide whom she marries. Years ago, she was raped and still nurses a hatred for men. Her boyfriend, Youssef (Hassan Khissal), is a petty thief who lives off the little money she brings in as a part-time prostitute. None of this is evident to Fred who simply finds her alluring. He offers her a job as a house cleaner and then starts giving her extra money and gifts. He wants to teach her to swim in exchange for her teaching him how to dance. Raja appreciates the attention and knows that she can manipulate his emotions with just a look. Of course, Fred's campaign has one goal — the power to dominate her and eventually have sex.

Writer and director Doillon does a masterful job exploring the sexual politics in the unfolding relationship between Fred and Raja. The cross-cultural sparks that fly are the result of barriers of language, money, custom, and age. The drama becomes a battle of wills in which the power swings back and forth between the two of them. The hedonistic Fred learns a thing or two about the nature of his desire, and Raja comes face to face with her lack of trust in men. 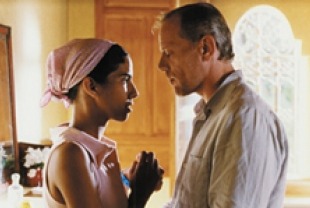