Directed by Emanuele Crialese
An unconventional Italian film about a free-spirited woman who earns the ire of her neighbors by her mood swings and impulsive actions.

The citizens of the island of Lampedusa off the Western coast of Sicily are all connected to the fishing industry in one way or another. Wives pack the fish their husbands catch. Young boys wait for the boats to come in and frantically retrieve small fish the men toss them, trading them so they can play games of chance.

Grazia (Valeria Golino) is the attractive and free-spirited wife of Pietro (Vincenzo Amato) and the mother of three children: thirteen-year old Pasquale (Francesco Casisa), ten-year old Filippo (Filippo Pucilio), and their adolescent sister Marinella (Veronica D'Agostino). She is the kind of woman who goes bathing topless in front of her sons and when her husband's boat passes, waves enthusiastically. Grazia has a reputation in the small community as an unbalanced person who's "too happy when she's up and too sad when she's down." When she is too anxious, she is overcome by violent convulsions, and Pietro has to administer a sedative with a hypodermic needle.

The community is unhinged when Grazia opens the doors to a kennel where all the stray dogs on the island are being kept in terrible conditions. They decide that she must be sent to Milan for psychiatric treatment. She runs away from home but Pasquale finds her and gives her shelter in a cave overlooking the sea. Her distraught husband joins members of the community searching for her.

Respiro, an Italian film, is written and directed by Emanuele Crialese. It begins as a portrait of a woman who refuses to abide by the conventions of the community and ends with a bit of magical realism. The story was inspired by a legend of a nonconformist who was apparently driven to suicide by the emnity and scorn of her neighbors. Valeria Golino is just right as Grazia, a woman who earns the ire of Pietro when she casually boards a sail boat owned by two Frenchmen and agrees to go out to sea with these strangers for some relaxation.

All the members of this family are hot-blooded: Pasquale gets in trouble over a sling-shot incident which leaves another boy injured, his little brother is very protective of his older sister, even though Marinella knows exactly what she's doing when she dallies with a shy and inexperienced policeman. Respiro is an unconventional film that works. 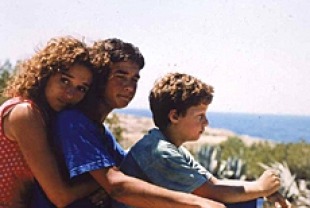