Directed by Francois Dupeyron
A spiritual adventure story about a Sufi grocer who passes on the wisdom of his path to a lonely adolescent boy filled with a yearning for something more.

It has been said that you are a Sufi when your heart is soft and warm as wool. Many of those who are on this path of love, devotion, and mystical knowledge are potters, rug dealers, and other artisans who live their realization humbly and cheerfully in the midst of everyday life. They are at ease with God and able to see beauty everywhere.

Monsieur Ibrahim is a graceful and glowing French film set in Paris, France, during the 1960s where a Sufi grocer brings light and love into the life of a lonely Jewish boy. There is a dreamy and fairy-tale like quality to this wonderful film that makes it quite enchanting. It is one of the few contemporary films to depict the special qualities of Sufism, the mystical expression of Islam.

Thirteen-year-old Momo (Pierre Boulanger) lives with his depressed and very critical father (Gilbert Melki). He has no recollection of his mother, and his dad constantly compares him unfavorably to an older brother who left home. Although they are very poor, Momo is determined to have sex with one of the prostitutes who frequent his neighborhood, Paris's red-light district. He breaks his piggy bank to get enough money, and Sylvie (Anne Suarez) initiates him into this mysterious world. Momo gives her a token of his affection — his teddy bear. Of course, his real interest is in Myriam (Lola Naynmark), the freckled and red-haired Jewish girl next door. After repeatedly dousing her with water from his upstairs perch, he finally musters enough courage to court her. But she is not ready for the intensity of his desire.

The one person in the world who appreciates his desire and his lust for life is the "Arab," Monsieur Ibrahim (Omar Sharif), whose small grocery is open from eight to midnight every day including Sunday. He is a Sufi, and not an Arab at all but from the Golden Crescent, an area that includes Turkey. Ibrahim watches Momo and notices that he frequently steals food for the meals he prepares for his father. When Brigitte Bardot (Isabelle Adjani) is making a film in the neighborhood and comes into the grocery for a bottle of water, Ibrahim overcharges her. He tells Momo that this will make up for all the things that he's stolen. The boy realizes that he has found a true and loyal friend who is very different from everyone else he knows.

Ibrahim suggests that Momo consciously try to smile more since "smiling is what makes you happy." He tries it, and things seem to go more smoothly — except with his father who says that his teeth are crooked and that he needs braces. After Momo learns that Ibrahim is a Sufi, he looks up the term in a dictionary and discovers that it refers to an inner religion that is against legalism. The grocer advises him: "When you want to learn, you don't pick up a book, you talk to someone." The wisdom that he passes on to Momo comes from the study of the Koran and from the heart. "What you give is yours forever. What you keep, you lose." And "Paradise is open to everyone."

Momo's father loses his job and declares that he just can't take care of his son any longer. He leaves him some money and vanishes. A while later, the police notify the boy that his father committed suicide by throwing himself in front of a train. His mother comes to their apartment but Momo wants nothing to do with her; he tells her his name is Muhammed. He has drawn closer to Ibrahim and is immensely relieved when this kind Sufi volunteers to adopt him.

Ibrahim is full of surprises, not the least of which is his purchase of a red convertible. Momo patiently helps him prepare for his driving test, which he barely passes. The two enthusiastic companions bid farewell to the prostitutes on the Rue Blue and head off on a cross-country drive to Turkey. The old man wants to visit his village. For Momo, the trip, his very first excusion out of Paris, is an answer to his yearning for adventure.

Francois Dupeyron directs this parabolic film based on the bestseller and play Monsieur Ibrahim and the Flowers of the Koran by Eric-Emmanuel Schmitt. Those familiar with the spiritual adventure stories written by Paulo Coelho will note the similar lightness of being in this endearing tale of friendship. The bonds between Ibrahim and Momo are solidified on their trip. The Sufi takes him to an Orthodox church, a Catholic church, and a Muslim mosque blindfolded so he can open to these places of worship through his senses. But perhaps the climax of their time together is when Ibrahim takes him to witness the whirling dervishes in Istanbul. He explains this form of prayer to Momo: "When you dance, your heart sings. They spin around their hearts, and God is in their hearts." The boy is deeply affected by the experience.

On their journey, Momo learns to slow down, to express his yearning in a variety of ways, to savor the world's beauty through his senses, and to open his heart to the wonders around him. As he receives these lessons from his Sufi friend, we receive them gratefully ourselves.

DVD features include an audio commentary with Omar Sharif. 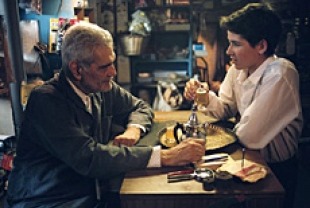