Directed by Nigel Cole
Celebrates the juiciness of some English women who finally accept their bodies and innate talents thanks to an innovative fund-raising project in their small town.

Chris Harper (Helen Mirren) and Annie Clark (Julie Walters) are best friends who live in a small village in the Yorkshire Dales. They are active members of the local Women's Institute, which is led by Marie (Geraldine James). When Annie's husband John (John Alderton) goes to the hospital with leukemia, both women are distraught. He writes a piece for the women's group on his favorite subject: sunflowers. With a bit of poetic flourish, he compares their beauty to women who in their last stages of life are glorious. At his funeral, these flowers show up as a tribute to him.

At first, the middle-aged women in the group are appalled at the idea but Chris and Annie manage to convince them that they would not be naked but "nude" and that an artistic photographer (Philip Glenister) would make everything look very tasteful indeed. Of course, there are glitches along the way such as anxious husbands, embarrassed children, and the political necessity of obtaining permission from the national organization in London.

Calendar Girls is a delightfully breezy English comedy inspired by the real-life story of the Rylstone and District Women's Institute, an organization that strives to "seek happiness in achievement." Director Nigel Cole (Saving Grace) has used the screenplay by Juliette Towhidi and Tim Firth to broaden some of the characters and add more zip to the drama. Only Chris and Annie are modeled after real people. Other characters in the ensemble include Ruth (Penelope Wilton), a woman whose husband is having an affair with another woman; Celia (Celia Imrie), an upper-class woman; and Cora (Linda Bassett), an organist.

This film does a wonderful job depicting the friendship between Chris and Annie, who at the outset get their jollies snickering at the inane themes chosen for the Institute meetings — broccoli, carpets, and the history of the milk marketing board. When Chris wins a baking contest with a sponge cake that she secretly purchased at a store, her friend can't believe her eyes. They find meaning and fulfillment together orchestrating the calendar project and overcoming all the obstacles against it. But they falter as friends on a trip to Hollywood to appear on the Jay Leno show. As is often the case when dealing with change, they find it difficult to accept each other's priorities.

Perhaps the most salutary dimension of this comedy is the way it celebrates the juiciness of these women who come to a fresh appreciation of their bodies and their incredible talents.

The DVD has two featurettes. The one titled "The Naked Truth" goes into the true story of the women of Kettlewell who inspired the film. The second covers the creation of the calendar for the film and the reactions of all involved. 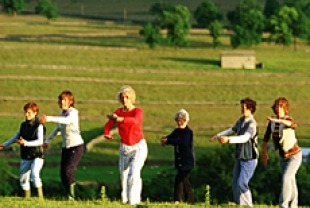