In 1979 in Raymondville, Texas, Jesus Moya from the United Farm Workers led onion field workers in their first strike against landowner Charles Wetegrove & Company. They were seeking a minimum wage for their backbreaking work. The white power holders in the community were enraged that outside agitators had been able to enter their quiet community and stir up so much trouble. Of course, the Mexican-American migrant farm workers were not happy about being paid a mere twenty-five cents for filing one bag of onions!

Filmmaker Hart Perry has made a fascinating documentary that offers a thought-provoking portrait of the growing gap in this country between the haves and the have-nots, usually drawn along racial lines. Juanita Valdez and other Mexican-Americans are empowered by the strike and join with others in trying to stop the discrimination in the schools against the Spanish-speaking children. They put up one of their own to run for the school board but are outfoxed by the good ol' boy network that runs a write-in candidate.

The third section of the documentary takes place in the 1990's as Juan Guerra, a Mexican-American lawyer, is attempting to give Latino students a fair shake. Most of the Anglos in Raymondville still blame the 1979 strike for the sharp economic decline and the lingering racial animosity in the town. Guerra faces attacks from those in the white community who see him as a trouble-maker. But he persists and wins enough votes from his constituency to be elected county district attorney. Perry has made a hard-hitting film about the shadow side of so many American communities where injustice expresses itself through racial prejudice and the growing gap between the rich and the poor. 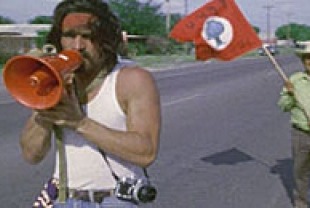