A Boy and His Dog

Directed by L.Q. Jones
A wild and weird adaptation of a Harlan Ellison sci-fi story set in the wilderness after World War IV.

The year is 2024 and atomic war has left only a small band of humans alive. They have to scavenge for food and water. Vic (Don Johnson) is a crude and uneducated fellow whose companion is Blood, a telepathic talking dog voiced by Tim McGuire. Out in the desert-like wilderness, they must constantly be on the lookout for Screamers, who are deadly enemies of human beings. Blood is much smarter than Vic, and his sense of smell comes in quite handy especially since his partner is always randy. Vic finds a woman named Quilla Jane (Suzanne Benton) who is even more interested in sex than he is and she takes charge. Blood is not impressed as he is pushed aside.

Vic, however, is very much taken with this woman. She eventually lures him down to Topeka, an underground fallout shelter where Lew Craddock (Jason Robards) and his Committee rule over a docile rural community. It turns out that Vic has been selected as a stud to service their women and restock their gene pool. Of course, this obstreperous rebel will have none of this nonsense. In order to make it back to Blood, who has vowed to wait for him, he has to square off against a very nasty robot killer.

This wild and weird adaptation of a 1969 Harlan Ellison short story has gathered a cult audience since its release in 1975. The DVD includes audio commentary by director L. Q. Jones. This sci-fi flick contains some witty repartee between Vic and his dog and some caustic comments on human nature. For example after an opening of nuclear bomb explosions, we read on the screen: "World War IV lasted five days. Politicians had finally solved the problem of urban blight." 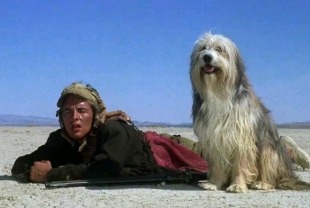