Directed by Philippe Muyl
A fine French film about a cross-generational friendship between a cranky entomologist and a lonely little girl yearning for some attention.

Eight-year old Elsa (Claire Bouanich) is a very lonely little girl. Her father left her mother, Isabelle (Nade Dieu), when he found out that she was pregnant, and she now works so hard as a nurse's aide that she has little time for her daughter. Julien (Michel Serrault) is a cranky Parisian widower who spends all his time on a collection of butterflies. After spotting Elsa alone waiting for her mother one day at a restaurant, he takes her home. She is very fascinated with his apartment and the butterflies. He tells her one room is off-limits and, of course, when he steps out, she enters and sees more butterflies — only these are alive and fluttering about from plant to plant. When he returns, he angrily shoos her out of his apartment.

Elsa has never been out of the city, so hearing that Julien is going on an excursion to the countryside, she begs to go along. He refuses to consider her request, wanting privacy and silence in his quest for a large butterfly that lives only three days and three nights. But arriving at his hotel, he finds that Elsa has hidden herself in his car. Against his better judgment, he decides to take her on his expedition to the Alps. She tags along behind him filled with questions and wide-eyed with wonder at her first sights of a deer and a cow. Elsa purposely knocks out Julien's cell phone so he can't reach her mother but is distraught when her GameBoy refuses to work after she gets it wet. At one point, she says: "I can tell you never had kids, you're clumsy with me." She's only partly right, it seems that his son died when he was only 28, and Julien regrets that he was not closer to him as a father.

Philippe Muyl directs this French drama and draws out fine and multi-layered performances from the two leads. Serrault who was superb in Nelly & Mr. Arnaud comes across as a very private man who doesn't have much patience with children. Elsa manages to soften him up with her charm although he doesn't get too emotional about it. Claire Bouanichh is just right as the little girl who thrives on attention and has chosen basketball as her favorite sport because it is populated by tall people and she is so small. Sometimes she gets her words mixed up; she is afraid of being sent to an "orifice" when she means to say orphanage. But she's sharp as a tack on other occasions. After hearing Julien put down those who kill deer for the money they can make, Else calls him a poacher when he kills a butterfly for his collection.

The predictable subplot has Isabelle going to the police who then initiate a manhunt for Julien, assuming he has kidnapped Elsa. But no matter, these two connect with each other across the generations and share a very magic moment when he treats her to the special event of a chrysalis turning into a butterfly. The wonder she experiences is something she will, no doubt, never forget.

DVD extras include text biographies of director Philippe Muyl and star Michel Serrault, a photo gallery, and the theatrical trailer. 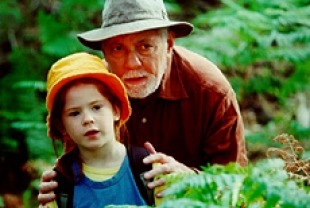