Directed by Anthony Minghella
A universal quest story about the yearning for hope and home that enables two lovers to deal with the harrowing menace and senseless violence of war.

Journey is an ideal metaphor for the spiritual life. It encourages us to see our experiences as a movement toward wholeness and transformation. In the Bible, there is a rich tradition of the road as an image of the spiritual life. The Jews wandered in the wilderness and had to face many obstacles on the way to the Promised Land. Jesus of Nazareth took the long, hard road up to Jerusalem, and Saul was converted — transformed — to Paul on the road.

In 1997, Charles Frasier won the National Book Award for Cold Mountain, a novel about a Civil War deserter's journey home to the woman he loves. He describes the story as "a meditation on what we fear and desire, the way we react to violence on a personal level and how we move away from violence towards peace, home, and a way of life. I think those are not particularly time-bound concerns. The Civil War gave me a concrete background, but any violent conflict could offer similar stories."

Writer and director Anthony Minghella (Truly, Madly, Deeply; The English Patient) has taken this ambitious quest novel and made it into a powerful drama about the yearning that enables two lovers to deal with the harrowing menace and senseless violence of the Civil War. The scope of the film is impressive, and we vividly experience both the challenges and the hardships these lovers experience in the agonizing interior journey that transforms them both.

Ada Monroe (Nicole Kidman) arrives in Cold Mountain, North Carolina, with her father, a minister (Donald Sutherland) who has just taken over this small parish. She is a beautiful and cerebral young woman who plays the piano, knows French, and is an avid reader. Through a series of brief encounters and nervous exchanges, Ada finds herself attracted to Inman (Jude Law), a carpenter who, like many of the young men in the town, gets caught up in the excitement of going off to war against the Yankees. The emotional threads that tie these two together consist of a few fragile moments that culminate in a passionate kiss and her promise to wait for him. While he is away, they do write letters to each other, and he carries with him a book and photograph Ada gave him as talismans of her love. Their yearning to return to each other's arms is a force field of energy that enables them to face a staggering series of ordeals.

In the Siege of Petersburg, Virginia, in July of 1864, Inman experiences the senseless slaughter of battle that convinces him of the hellishness of war. He rescues Oakley (Lucas Black), a friend from Cold Mountain who dies in a hospital. Later, while recuperating from his own severe wounds, Inman is read a letter from Ada expressing her desperate need for him. He decides to desert and walk to Cold Mountain, the only place on earth where feels truly at home. On his arduous trek, he experiences challenges to his will power and his loyalty to Ada with Veasey (Philip Seymour Hoffman), a disgraced minister; Junior (Giovanni Ribisi), a treacherous backwoodsman who lives with several promiscuous women; and Sara (Natalie Portman), a terrified widow with a sickly child who is attacked by some marauding Union soldiers. Battered and near death, Inman is taken in by Maddy (Eileen Atkins), a hermit in the woods who heals this weary traveler with her herbs and potions.

Meanwhile, Ada has to deal with her own challenges. Her beloved father dies of a heart attack, leaving her alone and poverty stricken. She relies at first on Sally (Kathy Baker), a kind-hearted neighbor who eventually sends her Ruby (Renee Zellweger), a hard-working mountain woman who knows how to bring Ada's farm back to life. These two women, who are worlds apart in education and personality, become good friends. Their lives are enriched by the music provided by Ruby's vagabond father Stobrod (Brendan Glesson), and his simple-minded friend Pangle (Ethan Suplee). When Georgia (Jack White), another musician, sings "Wayfaring Stranger" at an informal Christmas Party, the song seems to capture the melancholy feeling of life's transitory and difficult nature. But the violence of the war raises its ugly head in the community when Teague (Ray Winstone), head of the Home Guard, takes it as his personal mission to execute Army deserters and pacifists.

Cold Mountain convincingly depicts the gruesomeness of war and the way it sullies the body, mind, and spirit. There is no glory in it whatsoever, and once the engines of lawlessness, hatred, and violence are set in motion, it infects everyone who is even peripherally part of it. The film also conveys the hope and stamina needed by those who move away from war with a vision of home, peace, and reunion with those they love. Minghella has made a movie that speaks profoundly to these times when so many families seek an end to senseless war. Yearning is a difficult theme to bring to life on the screen but Cold Mountain pulls it off with creative flair and moral integrity.
The 2 Disc DVD set has a commentary provided by writer and director Anthony Minghella and editor Walter Murch. Other features include deleted scenes, a feature on the words and music of Cold Mountain, a documentary, and a making of special. 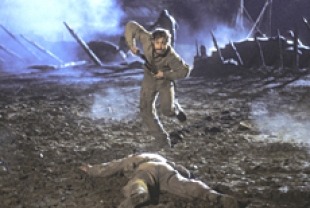 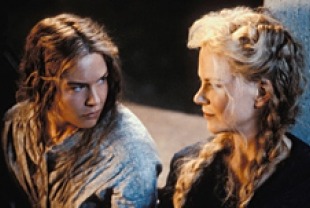