Directed by Jafar Panahi
A wonderful Iranian film with colorful characters and wry observations on the interactions of children and adults.

In an era when politics and ethnic hatred turn groups against each other, it is salutary to come across a film that reminds us of the universal human qualities linking people from different cultures together. The White Balloon is a wonderful Iranian film set in contemporary Iran on March 21, New Year's Day. Razieh, a determined seven-year-old girl, has her heart set on purchasing a goldfish for the holiday. Using every emotional trick in the book, she finally persuades her mother to give her the money she needs. On the way to the store Razieh stops to watch some snake charmers despite a warning to stay away from these men. This feisty little girl has a mind of her own!

Razieh's adventure turns into a nightmare when she drops the money and it falls beneath an iron grate. An old woman helps her out and then her older brother arrives. With persistence and ingeniousness, they set out to retrieve the money. Director Jafar Panahi, working from a screenplay by Abbas Kiarostami, has made a delightful small-scale film with colorful characters and wry observations on the interaction of children and adults. 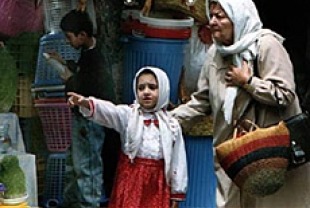