Directed by Siddiq Barmak
The harrowing tale of subjugated women in Afghanistan under the merciless rule of the Taliban.

A twelve year-old girl (Marina Golbahari) and her mother (Zubaida Sahar) are walking in a city in Afghanistan when Espandi (Arif Herati), an urchin, approaches them with a potion to ward off the evil eye. He gets some money from a foreign journalist with a camera. Turning a corner, they encounter a large demonstration by women who want work. Then the Taliban arrive in trucks and disperse the crowd with water hoses. The terrified girl and her mother run for their lives. The Taliban are merciless in their cruel over-reaction to the demonstrators, many of whom have small children.

The girl’s widowed mother — she lost her husband in the Kabul war and her brother in the war with Russia — tries to keep food on the table by secretly working in a hospital. But when the Taliban arrive, they must flee again, but not before seeing some foreign women doctors taken away to prison. The sad image of a crippled boy hobbling alone down a deserted hallway captures the helplessness of those who have no resources in a besieged country. A man volunteers to give them a bike ride home but they are stopped by the Taliban who criticize him for the wanton exposure of his wife’s flesh. They order her to cover her ankles while on the bicycle.

At home, the mother laments the fact that she has no son to help them survive since women are forbidden to work. The girl’s grandmother decides that a drastic measure must be taken: they cut her hair and dress her up in boy’s clothing. Luckily, a friend of the widow’s husband agrees to let the girl work in his shop. However, she is forced to attend a local mosque for prayer with all the other men in the community. The girl makes several errors and becomes even more frightened about being exposed.

One day the Taliban gather up all the boys in town to come with them to attend the madrassa, a religious school which also serves as a center for training in military tactics. Espandi recognizes the girl but refuses to tell anyone about her true identity. When the other boys become suspicious of her, he gives her the name Osama, one that is very popular in the region. The girl faces one challenge after another under the watchful eyes of the Taliban. One of the worst is when a lecherous mullah takes the boys to the baths and tries to teach them how to clean their genitals. She miraculously passes this onerous test but is eventually caught and put on trial in front of the Taliban court.

Writer and director Siddiq Barmak created this harrowing drama after reading a newspaper about a young girl who disguised herself as a boy. It is the first feature length film made in Afghanistan since the fall of the Taliban and was shot with the only 35 mm camera in the country. Osama rigorously depicts the systematic abuse of women in every area of their lives. No wonder the little girl's grandmother complains, "I wish God hadn't created women." Unable to work or travel outside without an accompanying male, their lives are severely limited. Worst of all, of course, is the feeling that they are prisoners in a culture that despises their very existence. Osama delivers a cry from the heart of subjugated and humiliated women in Afghanistan under the rule of the Taliban.

The DVD special features include a featurette, "Sharing Hope and Freedom" with an interview with director Siddiq Barmak. 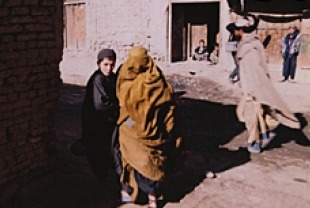 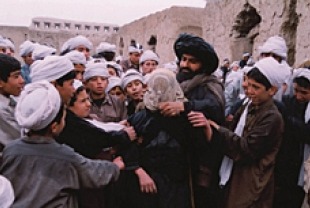