Directed by Rolf de Heer
A deftly rendered Australian parable about white racism and aboriginal survival techniques in the face of domination.

In this deftly rendered parable set in the Australian outback in 1922, four men are slowly making their way through the wilderness. They are in pursuit of an aboriginal man accused of murdering a white woman. The men are introduced as the Fanatic (Gary Sweet), the leader of the hunt who hates all aboriginals, regarding them as little more than vermin; the Veteran (Grant Page), an older and more laid-back man who was drafted for this job; and the Follower (Damon Gameau), a young fellow unaccustomed to this kind of expedition. They are led by the Tracker (David Gulpilil), a wise aboriginal who can read the signs of the fugitive on the rocky ground. He has also learned to play the role of subservient fool to "the Boss." Yet, of course, he is really in control of what happens on this trek through the outback.

When the party comes across a small group of bush blacks, the Fanatic interrogates them and then shoots them all in a rage. Rather than show the massacre, paintings are used to depict this and other acts of violence in the film. The threat of imminent danger begins to get to the small party. Even the Fanatic becomes unhinged when their pack horse is speared, the Veteran is wounded, and he almost drowns in an accident. The Tracker sees all that is unfolding and ponders in his heart the injustices along the way perpetrated by his boss.

Rolf de Heer (The Quiet Room) has written and directed this parable about the terrible treatment of aboriginals by the domineering and racist whites who settled in their country. The emotional undertow of the drama is enhanced by the use of folk music by Graham Tardiff and lyrics by De Heer that bring to mind Neil Young's score for Jim Jarmusch's film Dead Man. These songs are sung by Archie Roach, an aboriginal. David Gulpilil delivers his finest performance to date as the Tracker, a role he also played recently in Rabbit-Proof Fence. The surprising finale of this film gives him the last laugh in more ways than one. 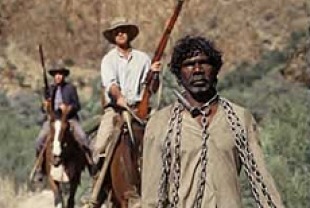