A Hero Ain't Nothin' But a Sandwich

Directed by Sidney J. Furie
Shows how addiction can get the best of a person-eating a black hole in all the dspartments of life.

Thirteen-year-old Benjie lives with his mother and grandmother in Watts, California. He's a bright boy burdened by the absence of his father who deserted the family. When Butler, his mother's lover, seeks to befriend him, Benjie tightens up. Trying to protect himself from the hurt of what he thinks will be another abandonment, he constructs emotional barriers. Benjie finds in heroin and hiding place and an escape from his problems. Eventually the habit gets the best of him — eating a black hole into his studies, disrupting his life at home, and forcing him to steal, even from his grandmother.

A Hero Ain't Nothin' But a Sandwich is based on an novel by Alice Childress. She has adapted it for the screen. The first half of this movie effectively conveys Benjie's easy free-fall into drug use. We understand why he is such an easy mark. However, once he enters a detoxification program, the story line sags and director Ralph Nelson is not able to get it back on track. When Butler fails to change Benjie through anger at his irresponsibility, he tries another approach — patient caring. In the film's closing scene he waits for Benjie to show up at the drug rehabilitation center. The boy arrives after the place has closed and they embrace. While this finale makes Bulter a hero in our eyes, there is no convincing indication that Benjie has conquered his heroin habit or come to a turning point in his relationship with Butler.

A few above average performances make up for this wobbly ending and Ralph Nelson's slipshod direction of the film. Larry B. Scott has some fine moments as Benjie — two of the best are when he haltingly reads an ode to his mother in English class and when he breaks down under a grilling from drug addicts in an encounter session. Paul Winfield conveys just the right mixture of strength and tenderness as Butler, and Glynn Turman is memorable in as a teacher who tries to arouse in his students a sense of bride in being black. 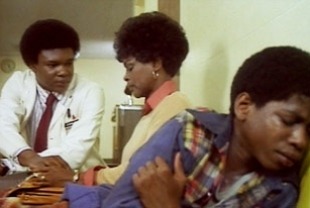