Directed by Rolf de Heer
A profound film about the emotional intelligence of little children.

The Quiet Room is a flawlessly acted and perfectly realized Australian film about a seven-year-old girl's emotional response to the complicated small world she lives in. The story is told totally from the girl's perspective by writer and director Rolf de Heer. He takes us into her imagination — a place where love, loss, fear, and fantasy coincide. Similar in spirit and artistry to My Life as a Dog and House of Cards, this bold drama reveals the powerful effects of all that we say and do within the family circle.

As a protest against the disintegration of her parent's marriage, this unnamed little girl (Chloe Ferguson) escapes into silence. However, we hear her thoughts in response to the words and actions of her concerned mother (Celine O'Leary) and father (Paul Blackwell). Listening to another argument in the next room, she thinks, "You're hurting my heart." The little girl yearns for the closeness she observed between her parents when she was three years old — a time of hugs and of her lying sandwiched between them.

Although her parents still play with her and read to her, she wants to live in the country and have a dog. Her goldfish, which keep dying, and a chicken egg, which she cannot get to hatch, are poor substitutes for the life she imagines she could have if she didn't live in an apartment. The little girl resists all her parents' efforts to pull her out of silence until she is ready. And when she finally speaks, there is love and truth in what she says.

The Quiet Room is a profound film about the emotional intelligence of little children. It zeroes in on the holy calling of parenting as a spiritual relationship that demands love, deep listening, real presence, and soulful resiliency. 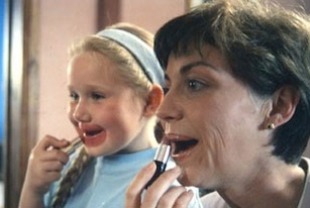