Directed by Timothy Bjorklund
A zippy animated feature with some clever musical numbers about a dog who wants to be a boy.

Spot (voiced by Nathan Lane) is an unhappy dog. He wants to shed his animal nature and become a boy just like his owner Leonard (Shaun Fleming). This pooch puts on a human disguise and attends school as Scott Leadready III. An overachiever, he even wins some awards.

When summer vacation arrives, Leonard and his mother (Debra Jo Rupp) head off the Florida where she is a finalist in a national teacher's contest. Spot is left at home with the family cat, Jolly (David Ogden Stiers), and an obstreperous canary, Pretty Boy (Jerry Stiller). On television the dog sees a television talk program where a Florida doctor, Dr. Krank (Kelsey Grammer), is condemned for his experiments in turning animals into humans. Spot decides to catch up with Leonard and his mother who are driving a "Wentawayho."

Things do not quite turn out as he expects when Spot subjects himself to Dr. Krank's technology. It has already produced two mutants: an alligator boy (Paul Reubens) and a mosquito girl (Megan Mullally). Spot and Leonard, aided by Jolly, Pretty Boy, and one of Leonard's classmates face the challenge of undoing Dr. Krank's flawed species transformation.

This film is based on Disney's Daytime Emmy-winning animated television series. Illustrator Gary Baseman has concocted some lively characters, and director Timothy Bjorklund manages to keep them in constant motion in this fast-paced animated feature. There are some very clever musical numbers including "A Whole Bunch of World," "I'm Moving On," and "A Boy Needs a Dog." Disney's Teacher's Pet is a hot diggidy dog flick.

The DVD special features include the series premiere episode, deleted scenes, a music video by Christy Carlson Romano, Disney's Song Selection, and a feature on the Art of Gary Baseman. 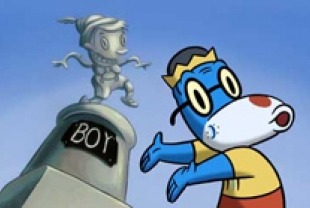