Directed by Charles S. Dutton
A rousing drama about a female manager whose gift of enthusiasm to a young boxer animates him to become all he was meant to be.

As a young girl, Jackie Kallen loves to hang around her father's Detroit gym watching her uncle, a boxer. Admiring her intensity and fascination with the sport, he encourages her to believe in herself and follow her dreams. At thirty-six, she (Meg Ryan) is the executive assistant to Irving Abel (Joe Cortese), director of the Cleveland Coliseum. Jackie is the driving force in the office, handling all the details involved in hosting boxing bouts. Her best friend and co-worker Renee (Kerry Washington) knows that she is destined for better things.

One evening Sam LaRocca (Tony Shalhoub), a brash boxing kingpin, challenges her to put her life where her mouth is when she says that she can manage a boxer as well as he does. He sells her the contract of a losing fighter for just a dollar. Jackie goes to introduce herself to the boxer and finds out he's heavily involved in drugs. During a brawl in his apartment, she sees Luther Shaw (Omar Epps) take him and another heavy on. Sensing that this young man has the power and moves of a potential champion, Jackie offers to be his manager. She convinces Felix Reynolds (Charles S. Dutton), a veteran trainer, to come out of retirement to work with him. Although LaRocca and the other men who control the sport try to keep Jackie out of the game, she persists in her dream to make Luther into a true contender. The only one who sees an interesting story in this white woman and her black boxer is Cleveland's TV sportscaster Gavin Reese (Tim Daly).

Against the Ropes is a fictionalized drama inspired by the story of Jackie Kallen, the most successful female manager in the history of boxing. Charles S. Dutton directs from a screenplay by Cheryl Edwards. Plenty of dramatic fireworks accompany this zealous woman's attempt to make waves in this masculine sport dominated by chauvinists. Meg Ryan puts in a stellar performance as Jackie, a woman whose dream is side-tracked when she tries to take the spotlight and all the acclaim for all her hard work with Luther. Fame is a soul-killer when it takes over anyone's life.

But the real theme of the film is the spiritual practice of enthusiasm. Or as John O'Donohue puts it: "One of the most beautiful gifts of the world is the gift of encouragement. When someone encourages you, that person helps you over a threshold you might otherwise never have crossed on your own." The dramatic arc of this film moves from the encouragement given to Jackie by her uncle when she was a child to the inspiration she gives to Luther at a point in his career when he needs it most. Against the Ropes makes it clear that boxing is an image of human struggle, including the struggle against fear and self-doubt. How incredible it would be if we all had someone in our corner building our self-esteem and giving us the encouragement we need to carry on no matter what!

The DVD includes two behind the scenes featurettes: "A Ringside Seat," and "Queen of the Ring: Jackie Kallen Then and Now." 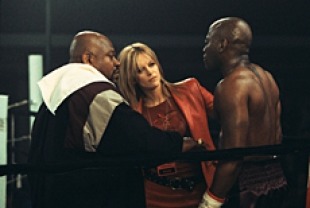