Confessions of a Teenage Drama Queen

Directed by Sara Sugarman
Features a pull-out-all-the-stops performance by Lindsay Lohan as a dreamer who runs on unbridled enthusiasm.

Lola Cep (Lindsay Lohan) is not a happy camper when her single parent mother (Glenne Headly) decides to move with her and her younger twin sisters from Manhattan to Dellwood, New Jersey. This teenage drama queen sees herself as "a flamingo amongst the pigeons." She dreams of a career as an actress and already has a wardrobe of amazing diversity. It's as if each day is a new audition. Her unusual clothes make her stand out from the crowd at her new high-school. She makes friends with Ella (Alison Pill), a shy and insecure soul, and threatens Carla Santini (Megan Fox), who is used to being the most popular and the most noticed person in the class. All three of them have one thing in common: they are huge fans of the British rock group Sidarthur. Lola has a scrapbook of pictures of the lead singer and songwriter Stu Woff (Adam Garcia).

This fast-paced and cleverly designed film is directed by Sara Sugarman (Very Annie Mary). The zippy screenplay is by Gail Parent based on the novel by Dyan Sheldon. The one quality that Lola has in spades, one which definitely sets her apart from her peers, is unbridled enthusiasm. It wins her the lead role in "Eliza Rocks," a contemporary musical version of Pygmalian concocted by Miss Baggoli (Carol Kane), the school's drama teacher. Lola's energy is contagious, and it opens up Ella's constricted horizons. But there is a shadow side to her enthusiasm — her need to always be the center of attention. This compels her to stretch the truth into some whooper lies. This almost destroys her friendship with Ella and nearly causes her disgrace when she and Carla get into a competition over who can get closer to the members of Sidarthur at a party in New York. Lindsay Lohan, who was superb in Freaky Friday, pulls out all the stops in this lively and funny tale of one inimitable drama queen. 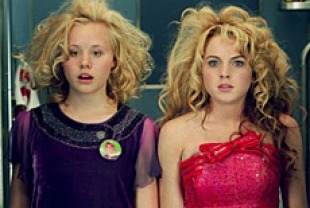