Directed by David Koepp
An intense thriller, adapted from a novella by Stephen King, that presents a rounded anatomy of resentment and anger.

Resentment is a destructive emotion, a cold anger that can devour our being and harden our heart. For many individuals who feel betrayed, slighted, or demeaned, it can become a way of life that colors all their days in such a way that they hardly notice its pervasiveness. This engaging thriller adapted from a novella by Stephen King presents a rounded and riveting anatomy of resentment and the white heat of anger that accompanies it. David Koepp who was the screenplay writer of Panic Room, Spider Man and Mission: Impossible has written and directed this drama.

Mort Rainey (Johnny Depp) is a successful writer who has never really gotten over finding his wife, Amy (Maria Bello), in a motel room making love to Ted Milner (Timothy Hutton). Years later, she lives in the beautiful house her paid for and is petitioning him to sign their divorce papers. Mort refuses. He is staying in an isolated cabin by a lake with her dog. Since Mort has a bad case of writer's block, he sleeps most of the time.

This escape from reality is interrupted by the appearance of John Shooter (John Turturro), a intense rube from Mississippi who claims that Mort plagerized a story he wrote. This menacing stranger wants him to rewrite the ending of the tale. And just to prove how serious he is, the Shooter kills Mort's dog. When the sheriff (Len Cariou) proves to be of little help, the desperate writer hires Ken Karsch (Charles S. Dutton), a detective he has used in the past, to help him get Shooter out of his life, Meanwhile he tracks down a copy of an Ellery Queen magazine where the story first appeared. This will prove that Mort wrote the piece of fiction before Shooter did.

Secret Window is carried by Johnny Depp's multileveled performance as the slovenly, lazy, and slightly deranged writer. The opening scene of this thriller, where he discovers his wife betraying him, contains important details of the depths of Mort's resentment. This cold anger settles inside the writer and causes him to return to two of his bad habits from the past — drinking and smoking.

Stephen King has explored some of the special challenges faced by writers in The Shining and Misery. Add Secret Window to that list of well-done psychological portraits of the demons that haunt the minds and souls of those who entertain us with their stories.

The DVD Special Features include audio commentary with writer/director David Koepp, and featurettes "A Look Through It," "From Book to Film," "Secrets Revealed: Deleted Scenes," and Animated Storyboards. 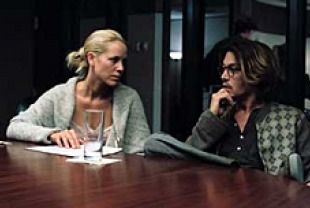