Directed by Jim McKay
An emotionally affecting film about the devastating changes taking place in the lives of the working poor in Brooklyn now that the traditional safety nets no longer protect them.

The working poor are hidden from our sight. Major movies don’t focus on them, although there are large numbers of them living in New York and Los Angeles, where so many films are made. Jim McKay, who wrote and directed Girls Town (1995) and Our Song (2000), has made a emotionally affecting film about the plight of the working poor in Brooklyn. Using a fascinating cross-cut of characters — white and black, rich and poor, young and old — here is a slice-of-life drama about the devastating changes taking place in the lives of people now that the traditional safety nets no longer protect them.

Ira (Jordan Gelber) inherited Raskin's, a family restaurant, from his father. It is an institution in Brooklyn that has seen good and bad years. Now, its time is running out with business getting worse and nothing on the horizon to bolster the bottom line. Ira has made a deal with a real estate company that intends to build high rises on the property and populate the rest of the neighborhood with upscale eateries and shops. When Ira tells Arthur (Stephen McKinley Henderson), the maitre'd and oldest employee, that they will have to close the place down in three weeks, Arthur is upset that he did not let him participate in the conversations about the deal. He wonders whether Ira has any idea what this will mean for him after so many years of loyalty and devotion.

The waiters, waitresses, and cashiers receive the news with anger and resentment. Most of them have no where else to turn for employment and no savings. They know that the safety nets that used to protect people like them are in shreds. They are also jealous of Ira because the deal will leave him well off while they will go begging.

Joleen (Bridget Barkan) is very upset about losing her job as a cashier. She’s already having a hard time keeping things together as a single mother with a mixed-race three-year old son. To make matters worse, she is humiliated by Akbar (Reg E.Cathey), an African-American hustler who accuses her of only giving him change for a $10 when he gave her $20. On the street, he sells Black Ribbons, which symbolize "the death of the spirit of the black man." Later, some tough young African-Americans, call him a bum and ridicule his decrepit shoes.

Erin (Sydnee Stewart) starts the day with her rapper boyfriend informing her that he isn't ready to have her move in with him. Then, her mother Betty (Iris Little-Thomas), who has been successful in the corporate world, pays her a visit at work and tries to convince her that going to college is the best thing that she can do for her future. Erin, who is ashamed of her upper-middle class black upbringing in suburbia, wants to scrap higher education and pursue her passion for poetry full-time.

A world away from these women is Sol (Stephen Axelrod), a middle-aged Jewish dishwasher who is an ex-con and a recovering drug addict. He was excluded from the meeting informing the rest of the staff that Raskin's was closing down. Now he is losing the one thing that was holding him together. In an angry tiff with Ira, he quits and during an AA meeting reveals that he is really up against it.

Ron (Ron Butler), the African-American real estate agent who put the deal together, is convinced that Raskin's is yesterday's news and changes will make this Brooklyn neighborhood cleaner, safer, and more prosperous. When Ira shows signs of wanting to back out of the deal because of his emotional feelings for the place, its employees. and customers; Ron is forced to play hardball, threatening him that he will never be able to stand up against the competition that comes with a gentrified street. Later, on the way to Raskin's, this black broker is slugged in the face by an angry young man swaggering down the street with his friends. Retreating to the bar with a black eye, he has a drink with a black woman (Verna Hobson), who seems to be a regular customer. He tells her that the place will be closing down and that he is the man who made the deal. Responding to his view that progress will make the neighborhood a better place, she says: "You can’t wash out all the color and keep the flavor."

This is an important and totally engaging film. Writer/director McKay is already making his mark as a cartographer of the urban soul. He populates his movies with characters and situations that we find ourselves caring about deeply. We need many more movies like this one that bring the faces and the feelings of the working poor into our consciousness. 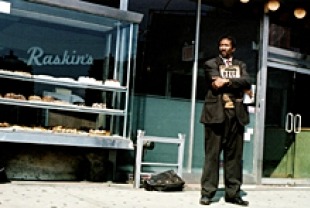