Directed by Kim Ki-duk
A luminous meditation on the wisdom of Buddhism and one of the best films of the year set on a floating raft monastery in Korea.

Welcome to a small Buddhist monastery situated on a raft floating in the center of a mountain pond. An old monk (OH Young-soo) is trying to pass on his wisdom to a child monk (KIM Jong-ho). His teachings are connected to the four seasons, and they accrue over the years.

The student still has some rough edges. In "Spring," the first part of the film, the boy and the master go to gather herbs from the forest for use in their healing arts. Off on his own, the boy plays a game in which he ties stones to a fish, a frog, and a snake, laughing as his victims move away slowly with their new burdens. The next day, he wakes up to discover that the Old Monk has tied a large stone on his back. He is told that he must find and release the animals and if any of them is dead, "you'll carry the stone in your heart for the rest of your life." The lesson burns its way into the boy's consciousness.

In "Summer," the young monk (SEO Jae-kyung) is 17 and just getting interested in the outside world. He is quite excited when a woman (KIM Jung-young) arrives at the monastery with her sickly daughter (HAYeo-jin). After some time spent in prayer, the Old Monk tells the mother, "When she finds peace in her soul, her body will return to health." The young Monk's desire is aroused from contact with the girl, and they eventually have sex. The Old Monk does not chastise his protégé but warns him that lust awakens the need to possess, and this can lead to even greater troubles. But the young Monk cannot hear the words and after the girl is sent away healed, he follows after her taking a Buddha statue and his few possessions.

In "Fall," the Old Monk brings a large white cat to be his companion on the raft. The Young Adult Monk (KIM Young-Min) returns to the monastery as a fugitive from the law consumed by anger. To calm him down so that he can tap into the peace within, the Old Monk orders him to carve Buddhist sutras into the deck of the hermitage. Two policemen arrive to arrest the Young Adult Monk, but they allow him to finish his penance. When he collapses in exhaustion, they help decorate the sutras before taking him away. This is a beautiful scene and a rare one — a visual metaphor for the impact of sacred teachings upon a small community.

In "Winter," many years have passed, and the Old Monk has died. Ice covers the pond when the mature Adult Monk (KIM Ki-duk, also the director of the film) returns to pick up where he left off so many years ago in his training. To make sure that his mind and body are fit, he practices a martial art on the ice. A woman who has covered her face with a purple cloth arrives at the monastery with an infant. Then, after leaving her child behind, she falls through a hole in the ice and drowns.

The Adult Monk takes out a statue of Kwan Yin, the Goddess of Compassion, then attaches a millstone to his body with a rope and drags it the top of a mountain. With this act, he carries in his heart all the suffering he has endured as well as the suffering of those he has come in contact with. From a place overlooking the pond in the distance, he meditates on Kwan Yin. Then he returns to pick up the cycle of the seasons. In "Spring" again, he begins training the child to be a monk, even as he was trained in the wisdom of Buddhism and the healing arts

This sense luscious film written and directed by KIM Ki-duk is one of the best films of the year. It is a luminous meditation on the wisdom of Buddhism and the cycles of human life as they are played out in the pristine beauty of the natural world. The images of the monastery floating on a raft are perfect in that they enable us to see the transitory and impermanent qualities of the world we live in day by day. Using the four seasons as a backdrop for the spiritual teachings of compassion, suffering, loss, desire, attachment, and transformation works perfectly. We loved feasting our senses upon the 300-year-old tree, the ripples of the pond, the varied animals at the hermitage, the mist that shrouds the pond in mystery, the monks' daily devotional rituals, and the many excursions to shore where a gate opens to the wider world that lies beyond. Everyone who experiences this extraordinary film will savor the complex emotions that make life such an exquisite spiritual teacher. 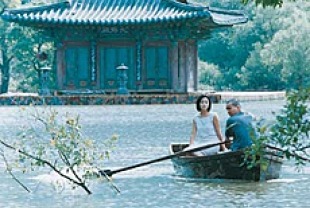