Directed by Amir Naderi
A visual valentine to New York subways and streets as well as a meditation on the universal human yearning to test ourselves against the limits of our mental abilities and physical stamina.

Amir Naderi is an Iranian filmmaker who has been living in the United States since the 1980s. This is the last in a trilogy of New York movies following A.B. C. Manhattan and Manhattan by Numbers. In this well-realized drama, he has created a visual valentine to the city as seen from the subways and streets while at the same time revealing a universally true human yearning to better ourselves through the administration of self-tests. This black-and-white release, along with Ten by Abbas Kiarostami, proves that thousands of low budget minimalist films could be made to open our eyes to people and places around the world that never cross our consciousness. These small and often innovative works offer a desperately needed supplement to the overwrought, big budget, special-effects-driven flicks that now dominate local cineplexes.

Gretchen (Sara Paul) is a young New Yorker who lives alone in small apartment and loves doing crossword puzzles. She is participating in her own private marathon to see if she can successfully complete 78 puzzles in 24 hours. Gretchen has found that she needs the noise and energy of the city to spur her creative juices while she is doing the puzzles. On the subway, she sits in a corner and focuses on the task before her. She is oblivious to those around her, and they seem to be lost in their own worlds as well: a man with his walkman, a woman reading a book, old and young absorbed in the kind of trance that the subway puts one into as it rushes down the tracks.

By eleven in the morning, Gretchen has only completed 18 puzzles, and she worries about being off pace. At home on her answering machine, the first of many messages from her mother is recorded. It turns out that she was also a compulsive crossword puzzle person whose record for 24 hours was 86 puzzles. Worried about Gretchen's safety at night, she warns her to not take chances. There is also advice about some tricks of the trade. Meanwhile, Gretchen steps off the subways for fresh air breaks. She successfully avoids a young man who claims to remember her from the past but can’t recall her name. The goal of beating her record is more important than shooting the breeze with this fellow, and so she ditches him.

A change of pace takes Gretchen to a tour bus but the guide's ongoing patter is too intrusive, and so it's on to other locales where she can tap into the energy of the place, such as Grand Central Station or Times Square. For a few minutes, she listens to an African-American drummer whose rhythm inspires her to return to the puzzles with fresh ardor. But the pressure is building as one puzzle stumps her and she reaches for a cigarette. Outside the windows of the train going uptown, she passes skyscrapers, factories, apartment complexes, and small shops and stores. The words dance before her eyes and that is all she sees. Feeling worn out and defeated, Gretchen returns home.

Her apartment is filled with crossword puzzles on the walls, subway maps, and thousands of newspapers in stacks on the floor. Gretchen doesn't know whether she has the stamina and the will power to complete the marathon. She has hit the wall, as runners describe it. But after throwing a fit, Gretchen settles down for the last seven hours in the apartment. She doesn't even use the tapes of subway sounds to complete the marathon. At the conclusion, a brief smile crosses Gretchen's face as she opens a window and sees snow falling on the streets of the city.

Is she happy for what she has accomplished? Has she learned anything new about herself from the challenges of the past 24 hours? Will she continue to test herself against limits in the crossword puzzle game or is this the last marathon of this kind? The filmmaker doesn't give us any answers yet we all will be able to fill in the spaces for ourselves. Even better, after experiencing this film, we can assess our own compulsions and measure their meanings to us. 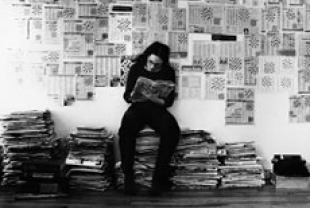 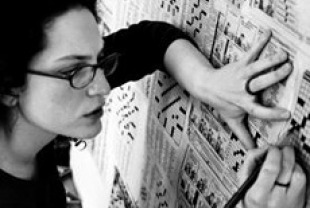