Directed by Ross McElwee
An extraordinary documentary by Ross McElwee that mixes American history, a romantic quest, and the search for meaning in the early 1980s.

Sherman's March was recently chosen for preservation by the Library of Congress National Film Registry as a "historically significant American motion picture." This 1986 feature has won best documentary awards at numerous film festivals including Sundance, and was selected as "One of the Top 20 Documentaries of All-Time" by the International Documentary Association.

The filmmaker, Ross McElwee, is 33 years old and still not married. After being ditched by the woman he loves, he is in limbo. His older sister is very critical of his scraggly appearance and laid-back lifestyle. She wonders if he will ever get himself together. She, on the other hand, is trying desperately to become more sexually attractive to men by getting a fanny tuck.

McElwee decides to make a documentary about General William Sherman's March through the South during the Civil War. He is very intrigued with this controversial figure who is still hated by many and viewed as a failure. Feeling somewhat out of it himself, McElwee begins a relationship with Pat, an attractive actress who gets his attention by doing some erotic anticellulite exercises in front of him. He follows her around and listens to her phantasmagorical ideas about a screenplay she wants to write. They head off to Atlanta where she auditions for a movie and tries unsuccessfully to make contact with Burt Reynolds. Meanwhile, McEllwee ponders Sherman's life and exploits and has dreams about a nuclear war when he is not tossing and turning in anxiety about his own future.

The filmmaker next meets Claudia, an interior designer who introduces him to a band of conservative survivalists who hate big government and have set up their own little paradise in the wilderness replete with food supplies and underground bunkers. McEllwee goes along for the ride but seems baffled by these outsiders. But at least they prove he isn't so strange!

On an island off Savannah, he discovers Winni, a linguist who lives alone in a tree house and finds all the attention he focuses on her to be quite satisfying. But when McEllwee leaves their retreat, she takes up with the only other man on the island. Next, one of McEllwee's good friends, a former teacher with very definite ideas about the kind of woman he needs in his life, introduces him to Deedee, who turns out to be a Mormon whose dowry includes a fallout shelter. McEllwee gets turned on by a rock singer and then visits an old girlfriend just to see if there's anything left of their relationship.

Through all of these encounters with women, the filmmaker comes to see himself more clearly as a confused man who uses his camera as a tool to keep himself apart from others. And in all of his commentary on Sherman's march, McEllwee manages to construct a portrait of the South and the ironies of history. This documentary, in its own meandering way, also has a lot to say about America in the early 1980s when fears about a nuclear holocaust were rampant and large numbers of people turned to fundamentalism as a kind of security. Sherman's March is an extraordinary documentary that deserves all the awards and acclaim that has been lavished upon it.

The DVD includes an interview with Ross McElwee, selections from other McElwee films, General Sherman's personal letters, and a photo gallery. 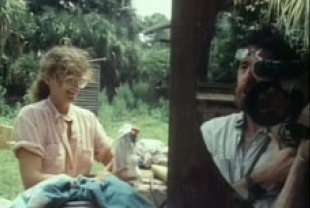