Directed by Hector Babenco
An unusual prison movie set in a Sao Paulo House of Detention where a doctor earns the respect of the prisoners with his genuine interest in the stories of their wayward lives.

The dehumanizing things done to prisoners by abusive and often violent guards is much in the news today. Yet usually the deplorable living conditions and indignities suffered by incarcerated men and women around the world goes largely unnoticed except by human rights groups. Hector Babenco's (At Play in the Fields of the Lord) new Brazilian film is based on Dr. Drauzio Varella's bestselling book about his experiences working in an AIDS prevention program at Carandiru, Sao Paulo's House of Detention. Built to be occupied by 3000, it was packed at the time with 8000 inmates. The most unfortunate ones lived in a 90 square foot cell with 17 other prisoners where they were unable to use the toilets from seven in the evening until seven in the morning since it would spoil the atmosphere for everyone.

A doctor (Luiz Carlos Vasconcelos) who has a kindly presence and a capacity to patiently listen to the men he treats suddenly finds himself being told the stories of many prisoners in 1992. They are stunned that anyone from the outside world would show any interest in them. In his first exposure to the crowded and dangerous place, the doctor looks through the peep holes into different cells and sees a strange world beyond his wildest imagining. There are stories told of Highness, a thief who has a white wife and a black mistress who squabble over him; of Zico, a drug dealer, and his friend Deusdete, who shows up at the prison after killing the two men who raped his sister; and Chico, a veteran prisoner who is put into solitary confinement after being mistreated by a guard. Other characters in this drama include Dagger, a violent man who accepts Jesus as His Lord and Savior; Ebony, a power broker in all disputes among the prisoners; a rapist who is murdered by the inmates; and Lady Di and TooBad, two men who fall in love with each other and are eventually married within the House of Detention.

Then, following a visitors day and a soccer match, a riot breaks out and heavily armed police arrive on the scene. The warden convinces the men to throw down their weapons and return to their cells after fires break out and refuse is thrown out the windows. The film ends with horrific scenes of the unarmed prisoners being shot down in the hallways and in their cells. By the end, 111 convicts lie dead in a massacre that illustrates the low value placed on the lives of prisoners.

Carandiru was demolished in 2002. The area it once occupied is now awaiting the construction of a leisure and cultural complex.

The DVD has an audio commentary by director Hector Babenco, a "making of" featurette, and some historical footage of the prison. 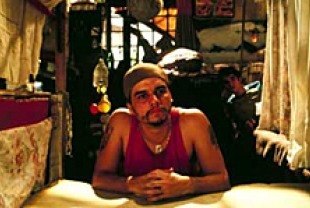