The Triplets of Belleville

Directed by Sylvain Chomet
An animated feature with two out-of-the-ordinary superheroes: a zealous old lady and a very fat dog.

You may have missed this inventive French animated feature from comic-book artist Sylvain Chomet when it was released in 2003. The tale with very little dialogue revolves around Madame Souza, a club-footed grandmother, who wants her lonely and isolated grandson, Champion, to become a world-famous cyclist. They live in a rundown and bleak apartment in Paris right next to the Metro tracks. The only one who derives any satisfaction out of this irritating aspect of their existence is Bruno, a very large dog who runs to the window and barks expressively at the passing trains. When Champion, whose muscular legs bulge out like balloons, finally gets his chance to compete in the Tour de France, he is kidnapped by some nefarious men in black suits. Along with two other cyclists, he is taken on a steamer to Belleville.

Thanks to Bruno's highly developed sense of smell, Granny eventually arrives in Belleville where she and the dog are taken in by three elderly sisters, a song-and-dance team who were once the most popular entertainers in town, known for their unique vocal sound based on street rhythms (the infectious Academy Award-nominated song "Belleville Rendez-vous"). While hamburgers are very popular with Belleville's obese citizens, these poverty-stricken women are forced to eat a variety of dinners consisting of frogs.

Those with a penchant for the bizarre will relish the heroics of Granny and Bruno who put a halt to the efforts of some determined criminals to make money in a gambling operation using the cyclists. The presence of a zealous old woman and a very fat dog as super-heroes is reason enough to celebrate this quirky French animated film.

The DVD extras include a featurette with Sylvain Chomet in which he explains the art of animation, a "making of" featurette, and the most enjoyable music video of "Belleville Rendez-vous." 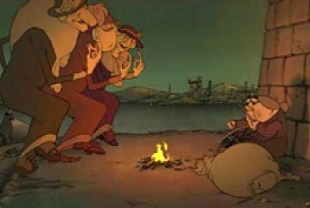