The Belly of an Architect

Directed by Peter Greenaway
A formidable meditation upon the intersection of the past and present, art and eros, mind and body.

Brian Dennehy gives a towering performance as a middle-aged American architect who arrives in Rome to organize a large-scale exhibition of the work of Etienne-Louis Boullee (1728 - 1799), a visionary French architect. In a nine-month ordeal, this anxious and paranoid man is undone by his own fears and intestinal maladies. Chloe Webb is featured as his pregnant and neglected wife, and Lambert Wilson plays an Italian architect who is scornful of Americans.

Writer and director Peter Greenaway ( The Draughtsman's Contract) makes the most of the visual grandeur of Rome. Exercising a meticulous attention to detail, the filmmaker builds the storyline into a formidable meditation upon the intersection of the past and the present, art and eros, mind and body. The film also succeeds as an inventive study of the obsessive dimensions that work can take. 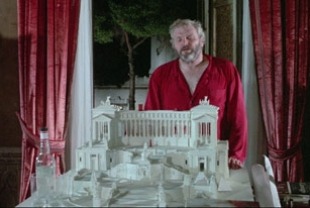