Directed by Richard Linklater
An enthralling love story that puts a capital S on Seduction.

In 1995's Before Sunrise, Jesse (Ethan Hawke), an American traveling by train to Vienna, meets Celine (Julie Delpy), a French graduate student on her way to Paris. Both in their twenties, they turn out to be soul mates who are entirely at ease with each other and able to talk freely about things that matter to them. After getting off the train in Vienna and spending an exhilarating day together, they cap everything off with an enchanted evening. Upon parting, they both realize that they will savor this intimate experience for the rest of their lives.

Now, nine years later, Jesse is in Paris after a 10-city tour of Europe doing publicity for his novel about their 14-hour romance. In the bookstore, he looks up to see Celine standing there. She lives in Paris, and they only have a little time to spend together before he is scheduled to fly home to his wife and young son in New York City. They are elated to discover how easy it is to pick up their conversation again. Celine talks about her job with an environmental group, and he shares the challenges he faced writing the book.

Both of them lament that their romantic relationships over the past nine years have not been fulfilling. Jesse confesses that while he was on the way to his wedding, all he could think about was Celine. He even thinks that he saw her that day. Imagine his surprise when she tells him that she was actually studying in New York then but did not know he was in the city. Celine has a lover but sex is a disappointment to her. She relates better to men when they have careers that take them on the road, like her present beau, a photographer.

After they admit that they should have taken each other's address and telephone numbers after their enchanted evening in Vienna, they discuss the reunion they had promised to have in six months. It turns out that Celine's beloved grandmother died, and she was unable to be there. Jesse did show up and was heartbroken when she did not appear. Reaching a new low in his life, he dabbled with Buddhism and found meaning in visiting a retreat center run by some monks. Although Celine doesn't find much in religion, she has always paid attention to the small details in life. It has helped keep her childlike wonder alive. When Jesse learns that she still plays the guitar and composes songs, he asks her to play him one back at her apartment. After a boat trip, they end up at her place with just a little time before he has to leave to catch his plane.

Writer and director Richard Linklater has made one of the most romantic films of the year. The way that Jesse and Celine reach out to each other is captivating and delightful. It's clear these two are yearning to make a fresh connection after so many years apart and so many moments of regret. And what a treat it is to see an entire movie built around conversation!

With her honesty, buoyancy. and mystery, Julie Delpy gives one of the best performances of the year as Celine. She catches all the nuances and the dark sides of this woman who can turn on the charm when she wants to. The actress, along with Ethan Hawke, contributed to the screenplay, and there is no doubt that the characters we see interacting are fully-drawn persons. The last scenes of Before Sunset are totally enthralling: they put a capital S on Seduction.

The DVD's special features are the trailer and a 10-minute "On the Set" film in which director Richard Linklater and stars Julie Delpy and Ethan Hawke talk about why they wanted to make a second film with the same characters and how the characters were created and have changed over the years. 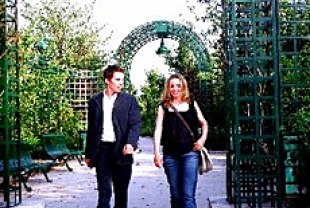 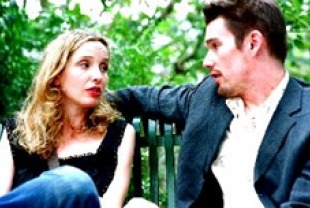