Children of a Lesser God

Directed by Randa Haines
An amphibian movie which introduces us to the world of the deaf and then moves with equal grace into universality as it explores the difficulties we all face in love relationships.

Children of a Lesser God by Mark Medoff won the Tony Award as Best Play of the 1978-1979 season. Hesper Anderson and Mark Medoff have fashioned a screenplay which opens up the drama and makes the most of the story's romantic vibrancy.

James, an idealistic speech therapist, is hired to teach at a school for the deaf. He uses innovative methods to inspire his eleventh grade class to read lips and speak. Even the skeptical principal of the institution is impressed with the new professor's success. Then, James meets Sarah, a twenty-five-year-old former student of the school who is now employed as the cleaning person. Born deaf, she has refused to learn lip reading or speech. Realizing that Sarah is very intelligent (her signing is brilliant), James determines to help her communicate more effectively in the wider world and offers to tutor her. But Sarah refuses to regard herself as needy and rebels against his attempts to make her into a poor imitation of those who can hear and speak. Mesmerized by her fiery independence and sensual beauty, James falls in love with Sarah. The feeling is mutual, and she moves in with him. However, despite their valiant efforts to break down the barriers which separate them, they are unable to penetrate each other's universe. James is frustrated by her stubborn resistance to adapt to the hearing world; Sarah resents his attempts to dominate and reform her. Following a violent confrontation, Sarah walks out and goes to visit her mother. Eventually, after a separation which only accentuates their need for each other, Sarah and James are reunited. They vow to find a way of being together in a world which transcends both speech and silence.

William Hurt follows up his Academy Award-winning performance in Kiss of the Spider Woman with another towering screen portrait as James, a teacher and a lover whose need to be in control hobbles his finer instincts. Marlee Matlin lights up the screen with her incandescent depiction of the passionate and feisty Sarah. The film debut of this hearing-impaired actress is a wonder to behold. Also good in supporting roles are Philip Bosco as the school principal, Piper Laurie as Sarah's mother, and seven hearing impaired actors and actresses who are featured as James' students.

Children of a Lesser God is an amphibian movie which introduces us to the world of the deaf and then moves with equal grace into universality as it explores the difficulties we all face in love relationships. True communion, we learn, must not come at the expense of deep respect for each other's precious individuality. 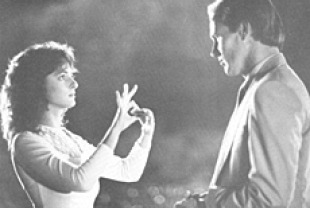