Directed by Charles Jarrott
Focuses on the turmoil in the lives of a middle aged couple.

Middle age is a period when individuals spend a great deal of time and energy taking stock of their lives. As a result, the middle years can be wise and felicitous or foolish and frantic — depending on the depth and realism of self-discovery.

A Married Man focuses on the emotional turmoil in the lives of a middle age couple. John Strickland (Anthony Hopkins), a successful English lawyer, has been married for 12 years to Clare (Ciaran Madden). They have two children, a house in London, and a place in the country. After reading Tolstoy's novella The Death of Ivan Illich, John begins reassessing his present situation. He realizes that the youthful idealism which inspired him to become a lawyer is now missing from his work. He is also bored with Clare's Catholicism and the conservatism of their bourgeois friends.

When John decides to assert his socialist political philosophy and become a Labor candidate for Parliament, his wife criticizes him for his vanity and takes no interest in his mid-life transformation. John begins an affair with Paula Gerrard (Lise Hilbodt), the radical chic daughter of a millionaire banker. Her thoughts soon turn to marriage and the prospects of propelling John's career into new vistas.

Then Clare and her lover Henry (Clive Francis), John's best friend, are fund brutally murdered. The effect on John is catastrophic. He finds a series of letters Clare wrote to a priest and discovers a side of her never knew existed. As the murder investigation continues, John learns more about himself and at last sees Paula for what she really is.

A Married Man is based on a 1980 novel by Piers Paul Read, a British writer best known in America for his best-selling book Alive, later turned into a movie. 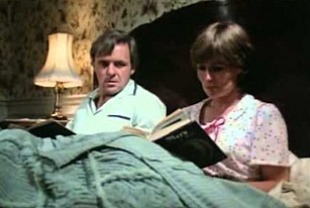