Directed by Joel Schumacher
A telling look at the confusions and challenges facing seven friends who have recently graduated from the same college.

In a New York Times article titled "Youth is Maturing Later," Kenneth L. Woodward and Arthur Kornhaber wrote of college students: "Physically, today's adolescents mature faster than their parents did. They also exhibit a superficial knowledge of sex and other 'adult' experiences. But in matters of emotional development — the ability to set one's own goals,to tolerate frustration, to postpone gratification, to take responsibility for others . . . — today's students are significantly less mature than their parents and their grandparents were at the same age."

St. Elmo's Fire is a telling look at the confusions and challenges facing seven friends who have recently graduated from the same college. They are Alex (Judd Nelson), a former Democrat who has taken a higher paying job with a Republican congressman; his live-in lover Leslie (Ally Sheedy), who wants to be an architect and is hesitant about marriage; Kirbo (Emilio Estevez), a law student who jeopardizes his future by pursuing the affections of a pretty woman (Andie MacDowell) whom he once dated in college; his roommate Kevin (Andrew McCarthy), a journalist who is cynical about both work and love; Billy (Rob Lowe), a saxophone player who will do anything to avoid responsibility for his wife and child; Jules (Demi Moore), who works at a bank, uses drugs and pursues casual sex; and Wendy (Mare Winningham), a greeting card heiress who lives at home, works as a social worker, an is infatuated with Billy.

Congregating at St. Elmo's Bar, their college hangout, these friends create an extended family. They look to one another for affirmation, support and counsel. And through a series of crises involving work, love, sex and suicide, they realize that the time has come to move ahead on their own. Director and co-writer Joel Schumacher orchestrates these proceedings with zest and makes the most of a very attractive and appealing young cast. 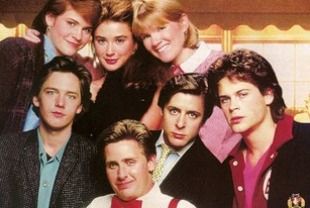