Directed by Francis Ford Coppola
A very entertaining and involving movie boasting a cornucopia of delightful comic moments and scenes which go straight for the heart.

Peggy Sue (Kathleen Turner) is separated from her husband Charlie (Nicolas Cage), who has fallen in love with a younger woman. Even though she has her own business and two supportive children, Peggy Sue feels very uneasy about her upcoming twenty-fifth high school reunion. Everyone will be expecting to see her and Charlie there together as the same happy couple they were in 1960.

At the reunion, Peggy Sue wears the dress she wore as prom queen; she reminisces with her best freinds from high school — Maddy (Joan Allen) and Carol (Catherine Hicks). Then she and Richard Norvik (Barry Miller) — the class nerd who is now a famous author — are chosen Queen and King at the reunion. While receiving the applause of those in attendance, Peggy Sue sees Charlie in the crowd and faints.

When she awakens, it's 1960 and she's on a cot recovering after donating blood during a school drive. Peggy Sue realizes that she has the opportunity to live her days as a high school senior over again with the benefit of all the knowledge and experience she had accumulated as an adult.

Having taken her parents (Barbara Harris and Don Murray) and younger sister (Sofia Coppola) for granted, she now verbally expresses her love for them. At school, Peggy Sue tells off Delores (Lisa Jan Persky), a nasty classmate, and spends more time with Richard, whose fascination with science has made him the proverbial outsider.

Knowing that she can change her marital fate by the way she responds to Charlie this time, Peggy Sue tries every trick in the book to sabotage their relationship. In addition, she's much more independent and liberated as a woman: Peggy Sue suggests to her girlfriends that instead of Saturday night dates with their boyfriends, they go to the movies together. She has sex with Michael (Kevin J. O'Connor), the class rebel who fancies himself a beatnick poet, and as a gesture of kindness to Charlie, who dreams of being a singer, she gives him a song which will make him famous — the Beatles' "She Loves You."

When the time comes for Peggy Sue to return to the present, she goes to her grandparents (Leon Ames and Maureen O'Sullivan) for counsel and support. Transported into the future, she awakens in the hospital with Charlie at her side. Buoyed by new self-confidence, Peggy Sue is ready to face tomorrow and whatever lies around the bend.

Peggy Sue Got Married is a very entertaining and involving movie. Kathleen Turner's charming, agile, and earnest performance in the lead role makes it easy for viewers to identify with her. Although Francis Coppola has directed other youth oriented films, this one best demonstrates his ample talents as a master mood maker. Peggy Sue Got Married is a cornucopia of delightful comic moments and scenes which go straight for the heart. 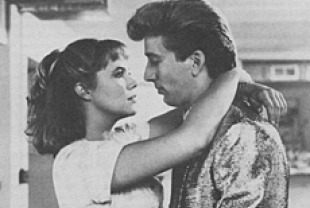