The Purple Rose of Cairo

Cecilia (Mia Farrow) works as a waitress and is married to Monk (Danny Aiello), a boorish cad who has been unemployed for two years. The setting is New Jersey during the Depression. Like thousands of other women of the period, Cecilia finds in movies an escape from the hardship and dimness of her everyday life.

A certain romantic adventure film, "The Purple Rose of Cairo," appeals to her so much that she has seen it five times. Imagine Cecilia's surprise when Tom Baxter (Jeff Daniels), the dashing lead character in the tale, literally steps off the screen and walks into her life! He feels trapped by the drama and wants to experience something more.

Cecilia is dazzled by Baxter's "magnetic glow," and the two fall in love. Meanwhile, back at the movie theatre, the rest of the cast of "The Purple Rose of Cairo" stop performing the drama and begin bickering among themselves and criticizing the audience.

In Hollywood, the panicked producers send Gil Sheperd (also Jeff Daniels), the actor who plays Baxter, East to locate the wayward character. The smooth-talking celebrity begins to woo Cecilia. Baxter reacts by whisking her away into the movie, convinced that she will find the fantasy world of champagne and romantic adventure more satisfying that her dull everyday existence. In the end, Cecilia must choose between Baxter, Shepherd, and Monk.

The Purple Rose of Cairo is an involving, imaginative, and entertaining work teeming with acerbic insights into the interplay between movies and life. With this film, director Woody Allen makes public the elements of his lover's quarrel with movies and provokes us to consider afresh the star system, the goals of producers, the needs of the audience, and the daydreams of film buffs.

Mia Farrow as Cecilia shines with the innocence and wonder of a true film lover. Jeff Daniels as Baxter and Shepherd exudes the charm and egotism of the two characters he portrays. A special treat is watching the rest of the cast of Cecilia's favorite film (Edward Hermann, John Wood, Deborah Rush, Annie Joe Edwrds, Zoe Caldwell, and Karen Akers) trade barbs. In all categories, The Purple Rose of Cairo qualifies as a thoroughly enchanting work of art by one of our finest moviemakers. 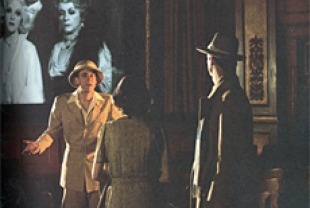