Directed by Alan Bridges
A well-acted screen adaption of a thematically rich 1980 British novel by Isabel Colegate about class conflicts.

It is 1913, shortly before the outbreak of World War I. A group of English aristocrats have gathered at the estate of Sir Randolph Nettleby (James Mason) for a weekend "shoot." The men will demonstrate their masculinity in the fields by firing at fowl flying overhead. The women will walk in the garden, exchange bits of gossip, and look forward to the evening dinner when they can dress in their finest.

Except for Sir Randolph, a world-weary man who is writing his memoirs, no one seems to realize that the sun is setting on Edwardian England and things will never be the same again. At one point, he observes: "If you take away the proper function of the aristocracy, what can it do but play games too seriously?"

The interpersonal games have been played discreetly. Lionel Stephens (Rueprt Frazer), a handsome barrister, and Lady Olivia (Judi Bowker) share an interest in the arts; as they talk about the writings of Ruskin, they cannot overlook the romantic yearning they feel for each other, despite her marriage to the very stodgy Lord "Bob" Lilbrun (Robert Hardy). In other extracurricular activities, Lady Aline (Charyl Campbell) finds in gambling and one-night stands the adventure lacking in her marriage to Lord Gilbert Hartlip (Edward Fox). Known as the "best shot in the country," Lord Gilbert is consumed by his competition with Lionel Stephens on the shooting field. Meanwhile, Cornelius Cardew (John Gielgud) appears on the scene to distribute pamphlets protesting the slaughter of the animals and proclaiming animal rights and the universal kinship of all living things. 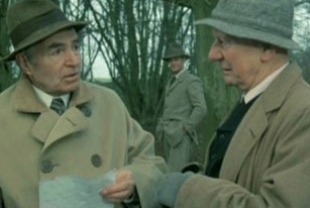