Directed by Mira Nair
An exquisite screen adaptation of Thackeray's novel about the poison of envy and the social climber in us all.

In American society today, the Winning Class enjoys great prosperity and all the perks that come with power and prestige. Signs of their reign are all around us: VIP lounges, chartered jets, exclusive restaurants, $1,000-a-day resorts, and gated communities filled with luxurious mansions. David Callahan notes that the Winning Class for the most part takes the attitude of Leona Helmsley who looked down on "the little people" and their adherence to the rules. They figure they can get away with their "white-collar crimes" because they can afford the best lawyers who belong to the same country clubs as they do. And then there is the trump card of the Winning Class: everybody else, it seems, wants to join their ranks. Why? Because they assume that material success and its accoutrements will make them truly free and happy. People on the top know that the chief engine driving those on the bottom is envy.

This cultural milieu provides the perfect setting for Mira Nair's exquisite screen adaptation of William Makepeace Thackeray's novel Vanity Fair as a morality play with great relevance for our times. The 1847 novel depicts the attempts of Becky Sharp, the daughter of a starving English artist and a French chorus girl, to transcend her humble beginnings and to climb the social ladder into the glittering high society of Regency England. She is animated by her steely ambition, beauty, wit, and determination. Unwilling to live in the present moment in the class in which she was born, Becky yearns for something more glamorous and exciting and enthralling for her future.

In the telling opening scene, the Marquess of Steyne (Gabriel Byrne), an art collector, arrives at Becky's father's studio. Admiring a painting of the artist's wife, he offers four guineas for it, but ten-year-old Becky demands that he pay ten guineas. The powerful nobleman is surprised by her audacity, but he ends up giving her what she wants. So begins the story of a young woman with big plans to leave behind her poor origins and to rise to high society where the well-born and the rich can do as they wish.

Nine years later, Becky Sharp (Reese Witherspoon) has just graduated from Miss Pinkerton's Academy and is going to the home of her best friend Amelia Sedley (Romola Garai) before taking a job as a governess. When the snobbish head of the Academy asks Becky whether she is ready to leave, she responds in fluent French, "Every slave wants to escape if he can, you stupid cow." The mistress doesn't understand but recognizes the insult when Becky throws the farewell gift of a dictionary out the window of the coach. Amelia Sedley (Romola Garai) is shocked at this unconventional behavior but remains Becky's staunchest defender.

At a party, Becky meets Amelia's fiancé, George Osborne (Jonathan Rhys Meyers), a dashing and self-absorbed soldier. She immediately sees through him and realizes that he is not the right man for her friend. Meanwhile, she flirts with Joseph (Tony Maudsley), Amelia's brother, a civil servant home on leave from India, who gives her a precious bird as a token of his affection. However, George warns him not to marry Becky, pointing out she's not well born and will never fit in with the other wives at the club. Amelia's snide mother has an even lower impression of Becky: "I had thought her only a social climber. I see now she is a mountaineer."

Becky, however, is a very confident young woman, not easily discouraged. She is taken aback only briefly when she arrives at the mansion of Sir Pitt Crawley (Bob Hoskins), a member of the landed gentry, and discovers that his messy and dirty house mirrors his character. Although she has been hired to teach his children, she has bigger plans to bring order to the chaos in the place. Rawdon Crawley (James Purefoy), Pitt's handsome son who is a soldier, is quite taken with Becky and sees that she is different from other women he has known. She also impresses Aunt Matilda (Eileen Atkins), who appreciates her clever wit. She tells Becky, "Oh, my dear girl, with a decent position, you could put the world on a leash," then invites her to live with her in London.

But Becky's rising hopes about attaining social status are dashed when Aunt Matilda turns against her after she marries Rawdon, whose chief source of income is gambling. Meanwhile, Amelia's family goes bankrupt, and George's merchant father (Jim Broadbent) decides that his son cannot marry her. The cocky soldier refuses to wed a rich woman who has been selected for him. William Dobbin (Rhys Ifans), a soldier friend of George's, is unable to declare his love to Amelia. He is the one kind person in her life, but she just doesn't see it.

Mira Nair (Salaam Bombay, Mississippi Masala, Monsoon Wedding) directs this lavish and brilliantly acted English literary classic. The screenplay by Matthew Faulk, Mark Skeet, and Julian Fellowes (Gosford Park) vividly conveys the class differences at the core of the story. Reese Witherspoon is convincing as the full-speed-ahead Becky Sharp. Her sexuality and singing voice become her tickets into high society when Steyne re-enters her life as her benefactor.

"You are Francis Sharp's daughter!" he declares upon discovering her background. "But I have several of his works. He'd a great talent for painting as I recall and none at all for life."

"I'm attempting to redress that balance," Becky responds. "It is my challenge."

Steyne advises her: "I have watched you in the lists and I wish you luck for it will not be easy. Of course, it's the women who keep the doors of Society closed. They do not like outsiders to discover there is nothing behind them."

Like many today who desperately desire to be part of the Winning Class, Becky is determined to break through the barriers and savor the status and the pleasures of High Society. Once there, she discovers a far different world than she imagined. Becky's yearning is carried into our hearts by the sympathetic performance of Reese Witherspoon, who proved her acting mettle in Election and the Legally Blonde comedies. She puts us in touch with the envy that lies in wait threatening to overtake all of us. She also reminds us that we have a social climber inside who is never satisfied with what we have and always craves more. In the end, the film is an effective cautionary tale that proves the truth of the Chinese saying, "Gold dust is precious, but if it gets in the eyes, it can blind." 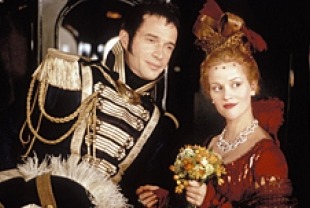 PG-13 - some sensuality/partial nudity and a brief violent image