Directed by Alison Maclean, Tobias Pearse
Explores the terrible fallout in the lives of Arab and Muslim immigrants whose human rights were violated by the U.S. Justice Department's zealous anti-terrorism campaign.

After the September 11th terrorist attacks, the U. S. Justice Department rounded up more than 5,000 Arab and Muslim immigrants and detained them for long periods of time on the grounds of national security. Called "persons of interest," these individuals were treated shamefully — subject to arbitrary arrest, secret detention, solitary confinement, and deportation. Their stories, for the most part, have not been told by the media. Attorney General Ashcroft insisted that the FBI only detained those suspected of terrorist activities and did not overstep its bounds. This powerful documentary by Alison Maclean and Tobias Pearse says just the opposite through the stories of 12 individuals whose rights were violated and whose families were subjected to terrible fear and hardship. They had all come to America because it was known as the land of the free.

Syed Ali, a Pakistan-born American citizen with a Ph. D. in criminal law, was jailed for 105 days. What evidence did the FBI have to justify subjecting him to such cruel and unusual punishment? In his home, they found his son's flight-simulator computer game and a receipt from the World Trade Center dated a month prior to the terrorist attacks. Another detainee, Brooklyn deli clerk Faiqi Medraj, was arrested and held for 60 days because he had WTC postcards taped to his freezer. Amanda Serrano talks about how her Algerian husband, Karim Tebbakh, was taken into custody at his workplace. When she finally saw him after three months, she was shocked by how different he looked. Released after 18 months in detention, he was then deported to Algeria and has been told that he will never be able to re-enter the United States. Muhammed Abushaker, a former resident of the Gaza Strip, was taken into custody and jailed for more than a year without any formal charges against him.

Persons of Interest has received the 2004 Humanitarian Award from Amnesty International. The interviews with these Arab and Muslim immigrants and their loved ones touch the heart and raise our righteous indignation over the violation of their rights and the ruination of their lives. 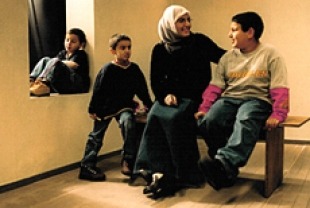