Trust is one of the cornerstones of marriage. But how can you share your life with a partner if you are a spy, sworn to secrecy? This is the central dilemma in Eric Rohmer's morally charged tale. This psychologically rich drama is based on a true story that has been amplified by the writer/director to suit his flair for exploring the nuances of morality. Like The Lady and the Duke (2001), this film also revolves around a gifted woman who is forced to display grace under pressure, a theme Rohmer finds appealing. Triple Agent is set in Paris and covers a time frame of 1936-1943. Newsreel footage succeeds in conveying the tumultuous political upheavals of the time — political changes in Russia, civil war in Spain, and the rise of Nazism in Germany.

Fiodor Voronin (Serge Renko) is a former Tsarist general who works for General Dobrinsky (Dimitri Rafalsky), the head of a White Russian Association in exile. He has been married for 12 years to Arsinoe (Katerina Didaskalou), a Greek-born painter. Although they are still very much in love, they have agreed that he will not share many details of his work since it is top secret. Arsinoe befriends Janine (Amanda Langlet), a teacher who lives upstairs with her husband, Andre (Emmanuel Salinger) and their daughter, Dany (Jeanne Rambur). Since these neighbors are Communists, their discussions when they get together for dinner are quite heated. Arsinoe paints a beautiful portrait of the little girl and gives it to her new friends.

One of Fiodor's colleagues lets them use his country home when Arsinoe is slowed down by illness. She adopts to her new life with aplomb but is taken aback by her husband's many travels. Then a friend tells her that Fiodor was spotted in Berlin when he had told her he was in Brussels. Arsinoe begins to wonder whether he is working as a secret agent for the Nazis. Then he springs on her his new idea that they move to the Soviet Union where he will teach in a military school and they will enjoy all the perks of a fancy lifestyle. Arsinoe has no desire to step into this dream. In the end, Arsinoe's trust of her husband puts her in harm's way, and it is quite shattering to see her treated so shabbily after years of love and complete trust.

Triple Agent is another thought-provoking moral meditation by the master of nuanced drama. 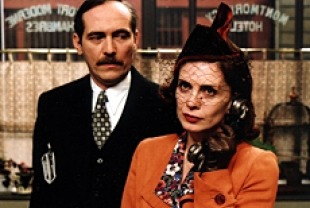