In this richly developed psychological drama from France, Nora (Emmanuelle Devos) is a 35-year-old art gallery director. She has a 10-year-old-son, Elias (Valentin Lelong), from her first marriage. Her second marriage ended in divorce, and now she is about to wed a rich businessman. Nora seems to be a woman in charge of her life: beautiful, accomplished, and ready to embark on a new journey. But her composure and confidence are shaken during a visit to her elderly father (Maurice Garrel), a writer. He has stomach cancer and only has a week to live; her special relationship with him is about to vanish.

Through flashbacks, Nora recalls the suicide of her first love and the way she picked up the pieces and started over again. Can she muster the strength and the energy to do that again? She isn't sure. Since Elias has not bonded with her husband-to-be, Nora wonders if he would be happier with Ismael (Mathieu Amalric), her second husband, whom she tracks down at a mental institution. This irresponsible and irrepressible violinist has not paid his taxes in a long time and has a habit of writing bad checks. His sister and closest friend have worked together to get him help. During his ten-day stay at the institution, Ismael talks to a kind-hearted psychiatrist (Catherine Deneuve), is visited by his drug-addicted lawyer (Hippolyte Girardot), and explores his inner life with a psychoanalyst (Elsa Wolliaston), who finds him quite amusing. Ismael is attracted to Arielle (Magali Woch), a patient at the clinic who has tried to kill herself several times.

The contrast between Ismael's frazzled life and Nora's surface control is quite intriguing. French director Arnaud Desplechin has a playful time bringing them together during a period when they both need to re-evaluate who they are and where they are going. While Ismael is willing to take another leap of love, Nora's cycle of woes comes to an end when she finds a devastatingly critical letter addressed to her amidst her father's papers for a new book. This bombshell throws new light on her entire life. Kings and Queen is a fascinating film filled with keen observations on sexual politics, psychology, and family roles. 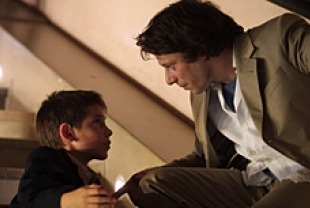