Directed by Peter Berg
A razzle-dazzle football flick about a Texas town and what their win-at-all costs ethic does to the young men on the team.

Welcome to Odessa, Texas, where high school football is the only thing that matters to the community. The town's hopes and dreams begin and end with winning the state championship. Everybody has an opinion on every game: what could have been done or should have been tried. On Friday nights "Gone to the Game" signs hang in nearly every business establishment. The fans in the largest high school football field in the nation are a lively crowd. They cheer for the players who demonstrate their talent, and they jeer the plays that don't work. To be a football player in this place is a blessing and a curse. A blessing because it's great to have so much attention and adulation, a curse because no 17-year-old boy should have to deal daily with the high expectations of the whole community. At one time, football was fun to play. But in Odessa and other cities across America, it's become a last chance to make your mark in the record books before your glory days are assumed to be all over.

The playmaker and star of the Permian Panthers is the African-American running back Boobie Miles (Derek Luke). He is everyone's favorite, and the team depends on him to make the difference in close games. But when he seriously injures his knee, the community's source of adrenalin seems to dry up, and everyone sinks into a depression. The team loses several games, and it looks like coach Gary Gaines (Billy Bob Thornton) will have to come up with a miracle if the team is to have any chance of making it into the championship playoffs.

Mike Winchell (Lucas Black), the quarterback, is under increased pressure once Boobie is out of the picture. But he is young man racked by self-doubts and a chronically ill mother who has pinned all her hopes on him. Another potential star is tailback Don Billingsley (Garrett Hedlund), whose father (Tim McGraw), a former star player for the Panthers, publicly humiliates him for his propensity to fumble. Perhaps the one player who has the best shot of giving the team some fresh gusto is Chris Comer (Lee Thompson Young), a third-string running back who has replaced Boobie.

Friday Night Lights is based on Pulitzer Prize-winning journalist H. G. Bissinger's 1990 book about the impact of one high-school football season on a Texas community. Peter Berg directs this razzle-dazzle movie and co-wrote the screenplay with David Aaron Cohen. The movie vividly conveys the town's unhealthy win-at-all-costs ethic, the obsession with sports over education, the rampant racism in the town, the incredible pressure put on the young men, and the investment of all feelings of local pride in the results of a Friday night game. The sign in the locker-room of the Permian Panthers says it all: "Whatever it takes."

Billy Bob Thornton puts in a stellar performance as Coach Gaines who rides up and down on the volatile emotions of the townsfolk and the greedy men who have hired him and expect him to produce state champions season after season. During one of the low points of the year, Gaines and his wife discover "For Sale" signs on their front lawn. One of the best things about this coach is the speech he constantly gives the boys about being perfect. By that he means that he wants them to play the game with full attention, wide awake, joyful pleasure, and openness to the rewards of working together as a team.

The final ten minutes of the film ought to stir the pulse of any true football fan: the fast and snappy editing of David Rosenbloom and Colby Parker Jr. makes for a visual treat par excellence. 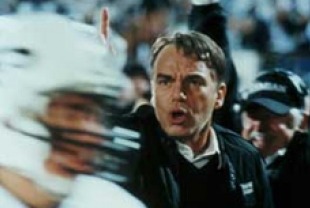