Directed by Zhang Yimou
A triple threat as an amazing martial arts film, a sense-luscious drama, and a romantic love story that touches the heart.

In 859 AD, a rebel group of assassins called the Flying Daggers has set up operations against the corrupt Tang Dynasty in China. The regime decides to send an undercover agent to infiltrate the group. Jin (Takeshi Kaneshiro), a police captain, takes on the assignment and heads off to the Peony Pavilion, a house of pleasure. Mei (Ziyi Zhang), one of the dancers there, is suspected of being a member of the Flying Daggers. Jin calls himself Wind and is quite stunned to discover that Mei is blind. She moves with great agility and impresses him with her beauty. But after too many drinks, Wind tries to sexually assault Mei and is sent away by Leo (Andy Lau), a fellow police captain.

In one of the three amazing set pieces of this visually exquisite film, Mei performs the Echo Game for Leo. He throws a bean that ricochets off a circle of drums. She is to slap her long sleeves on the exact spots where the bean hit the drums. Mei performs accurately until Leo tries to fake her out by throwing a whole jar of beans, creating a clamor of sounds to identify correctly. In an amazing feat of attention and memory, she matches the beans' movements with her sleeves slapping the drums. Leo and Wind know that they are in the presence of a formidable woman warrior who will more than test their mettle.

Locked away and threatened with torture, Mei escapes the prison with Wind. Can he win her trust and seduce her in the process? Wind sees himself as the consummate woman's man and he is sure she will fall under his persuasive powers on the road. In several vicious attacks by government soldiers, Mei proves herself to be a phenomenal martial arts practitioner, possessing skills that Wind has never before seen in a woman. She, on the other hand, is impressed with his efforts to prove that he is on her side. In several scenes, they put each other in a romantic swoon but do not carry through on their desires. But Wind has planted the seed of desire in her heart, and he shares his yearning that they become fugitives together as free as the wind of his name.

The Chinese director Zhang Yimou has charmed us over the years with the cinematic variety and excellence of his work. Among our favorites are the historical dramas, Raise the Red Lantern and Ju Dou, and the touching tales of peasants Not One Less and The Road Home. This tribute to martial arts films has two things that make it stand out from the crowd: the visual choreography of the story as a whole and the romantic intrigue between Mei and the two men who love her: Wind and a member of the Flying Daggers who has infiltrated the police force. The photography by Zhao Xiaoding is breathtaking and finely attuned to the changing of the seasons. The music by Shigeru Umebayashi enhances both the romantic interludes and the fight sequences. A battle that takes place in a bamboo forest is so amazing that many viewers will find themselves gasping in awe. Zhang Yimou has done what only Ang Lee with Crouching Tiger, Hidden Dragon has been able to do before him: create a martial arts film that also touches the heart. 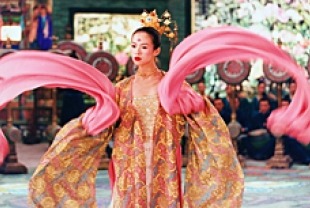 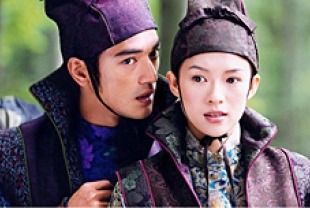 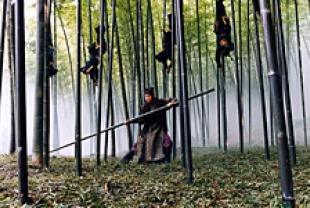