Directed by Ingmar Bergman
A poignant film where we watch family members bare their souls and in their faces we see intimations of the grand emotions that animate us all.

Saraband is the film that 85-year-old Ingmar Bergman has said will be his last. This Swedish film writer and director has made some 40 works including such classics as Wild Strawberries, The Magic Flute, The Silence, Cries and Whispers, and Autumn Sonata. He was awarded three Oscars for Best Foreign Film: The Virgin Spring, Through a Glass Darkly, and Fanny and Alexander. In recent years, he has written and directed for Sweden's national stage, The Royal Dramatic Theatre.

His last film, which was shot for television in high definition video, is a touching and emotionally resonant sequel to the 1973 film Scenes from a Marriage. It is divided into ten sections and deals with many of the themes that have interested Bergman throughout his long career — death, love, hated, marriage, family warps, and the role of the arts in the lives of creative people.

After not seeing him for 30 years, Marianne (Liv Ullmann) decides to visit her ex-husband Johan (Erland Josephson), who is now a millionaire thanks to an inheritance. He lives in a large secluded house by himself. Marianne has little communication with the two daughters from their marriage: one is a lawyer who lives with her husband in Australia, and the other is in a mental institution. Johan is not at all pleased with her surprise visit, and he lets her know it. Nonetheless, they hold hands as they look out on the beautiful view from his home.

Johan at 86 feels that his life has been "thoroughly meaningless." He mentions to Marianne that Henrik (Borje Ahistedt), his son from a previous marriage, is living nearly in a guest house with his 19-year-old daughter, Karin (Julia Dufvenius). He is a musician who is teaching her the cello and has high hopes that she will enter the conservatory. They are still mourning the loss of Anna, his wife and her mother, who died two years ago of cancer.

When Karin stops by for a visit, she speaks with Marianne and seems happy to be able to share her feelings with another woman. She has just had a fight with her domineering father. The tension between Karin and her father is nothing compared to the tension between Henrik and Johan, who have never been close. When the musician asks for an advance on his inheritance to purchase a cello for Karin's audition, Johan humiliates him. Later, Marianne meets him in a nearby church where he is playing the organ. He talks freely about his hatred for his father who seems to have nothing but contempt for him. After he leaves, Marianne says a silent prayer in front of an altar with a nurturing Jesus on it. Just as she is leaving the church, her breath is taken away by the beauty of the light streaming in through the windows.

Continuing his private war with Henrik, Johan reads a letter from one of his friends who wants Karin to study in Helsinki. Then she discovers a letter that her mother had written to her husband just before her death. It outlines her fears that Henrik is too close to his daughter and is making her too dependent on him. Yet Karin is convinced that going to Helsinki would destroy her father since he has all of his hopes and dreams invested in her.

In the closing scenes of the film, father and daughter and ex-husband and wife have their final encounters with each other. Although Marianne is the catalyst who draws out many of the repressed emotions in these relationships, it is Anna who has the largest and most indelible impact on all of them. Saraband is beautifully acted by Liv Ullmann, Erland Josephson, Borje Ahistedt, and Julia Dufvenius. The old Bergman magic is still there as these family members bare their souls. On their luminous faces we catch intimations of the grand emotions that have animated his movies since the beginning: love, hate, fear, anger, disappointment, yearning, and joy.

DVD features include behind the scenes "The Making of Saraband" and trailers of Sony Pictures previews. 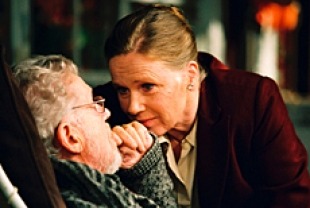