The Life Aquatic with Steve Zissou

Directed by Wes Anderson
Director Wes Anderson's cinematic tributes to wacky individualists whose flaws and follies are both funny and touching.

"If there is any miracle in the world, any mystery, it is individuality," Rabbi Leo Baeck has written. In his wonderful coming-of-age film Rushmore, director Wes Anderson demonstrated a quirky respect for the idiosyncrasies of difficult people. In The Royal Tenenbaums, he and co-writer Owen Wilson created one of the most cantankerous families in screen history. They managed to make their flaws and follies funny and touching at the same time. Some of the same energy and creativity is at work in this larky comedy about a 52-year-old oceanographer whose illustrious career is on the downswing when a young man shows up and claims to be a son from a long-ago love affair. Director Wes Anderson again plays with the oddness of the lead character, who is this case is a middle-aged man whose quirky sense of adventure is what keeps him going.

Steve Zissou (Bill Murray) is a famous oceanographer whose best friend (Seymour Cassel) and lead diver has just been killed by a shark before his shocked eyes. The fundraiser (Michael Gambon) for his Jacques Cousteau-like operation is having a hard time raising money for his latest documentary. Steve is having troubles with his wife, Eleanor (Anjelica Huston), who is the real brains behind his operation. His main competitor in the field is Alistair Hennessey (Jeff Goldblum), Eleanor's first husband, who has a fancy sea lab, a slick crew, and all the latest gadgets that money can buy.

An investor is finally found for Steve's expedition to avenge himself on the killer shark. Bill Ubell (Bud Cort), a mild-mannered bond company rep, shows up to be a part of the mission. Also on board is Jane Winslett-Richardson (Cate Blanchett), a pregnant journalist who has told Steve she wants to do a laudatory piece about him. But as she proceeds, he becomes more and more paranoid about her true intentions. But the real surprise on the expedition is Ned Plimpton (Owen Wilson), a polite and enterprising young man who claims to be his son from a love affair years ago. At first, the two men are quite uneasy with each other but gradually they relax and let down their guards. Through several adventures, including a kidnapping by some heavily armed pirates and a shoot out at Hennessey's tropical estate, Ned proves to be resourceful young man.

All fans of Bill Murray will treasure this follow-up performance to his tour de force last year in Lost in Translation. He beautifully conveys the middle-age blues of a man who fears that his best days are over and that it's all downhill from here on out. The unexpected father-son reunion tests Steve's mettle, patience, and capacity to love. Trying to catch the melancholy undertow to the story, Anderson has given far too much time to the guitar-playing and singing of a member of the crew (Seu George) whose ballads grow increasingly tiresome. Nonetheless, The Life Aquatic with Steve Zissou manages to keep afloat Wes Anderson's continuing cinematic tribute to wacky individualists. 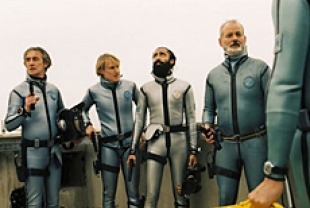