Directed by Martin Scorsese
Charts three decades in the life of Howard Hughes, a forerunner of today's successful businessmen who love power, money, and the chance to do whatever they want.

In his book, The Virtue in the Vice, Dr. Robin R. Meyers states that America is not a Christian country but more a Roman one: "We worship perfection and power, and thus hate our imperfect lives and feel powerless in the face of impossible standards." The Aviator is a biopicture covering three decades in the life of Howard Hughes, a rich tycoon, a maverick movie-maker, an accomplished pilot and industrialist, a womanizer, and an eccentric whose obsessive-compulsive behavior eventually turned him into a recluse. Leonardo DiCaprio gives an Academy-Award caliber performance as this perfectionist who can be considered a forerunner of today's successful capitalists who love power, money, and the chance to do whatever they want.

In the poignant and weird opening scene, a very young and nude Howard is being bathed by his mother. She has him spell "quarantine" and warns him that the world is not a safe place, given all the sick people and diseases. This lesson was taken to heart by the rich little boy who would later become phobic about germs, compulsively washing his hands over and over to avoid contamination.

At 21, Howard (Leonardo DiCaprio) has inherited a great deal of wealth, but instead of simply enjoying it, he sets his sights on conquering Hollywood in the late 1920s by making a World War I epic, Hell's Angels. Director Martin Scorsese has a delightful time depicting this young man's fascination with movies and his perfectionism that kept upping the ante to make his production more impressive and stunning. No expense was spared including the hiring of a college professor (Ian Holm) to monitor the weather so that the scenes of fighter planes would be set against clouds that look like breasts. In a crucial scene where Howard meets the movie mogul Louis B. Meyer (Stanley DeSantis) at the Coconut Grove, he is viewed as a loser who doesn't know what he is doing. Of course, Howard has the last laugh with a spectacular premiere and success enough to make more movies.

In the 1930s, the entrepreneur meets Katherine Hepburn (Cate Blanchett), and the two find they are fond of each other's eccentricities. They both treasure solitude and squirm uncomfortably when his press agent and Errol Flynn (Jude Law) crash a private dinner engagement. After the famous actor steals a bit of food from his plate, Howard is sickened and leaves with Katherine. In a standout scene, he takes her up in his plane, allows her to play pilot, and in a demonstration of his affection for her, given his germ phobia, shares a sip of milk from the bottle where she has put her lips. But they realize just how far they are apart when the famous actress takes him to meet her politically liberal and elitist family in Connecticut. The clan is not impressed with the strange man Katherine has chosen as a soul mate. Howard's compulsive need to always have a new pretty woman on his arm eventually drives Katherine away. She is replaced by Faith Domergue (Kelli Garner), a teenager he is grooming for stardom, and then by Ava Gardner (Kate Beckinsale), who is appreciated for her buxom figure.

In the second half of the film, screenwriter John Logan introduces a storyline that is perfectly in sync with the present-day reality of corporate power in Washington, D.C. Hughes was an aviation pioneer, first as a pilot who set various records and then as the founder of TWA whose competition with Pan Am Airlines in the 1940s took on mythic proportions. His rival is Juan Trippe (Alec Baldwin), who uses his power and influence to purchase the services of Sen. Ralph Owen Brewster (Alan Alda) to insure that Pan Am maintains a monopoly on international air travel. In a hearing in Washington, Hughes is charged with squandering government money on projects for the military during World War II. But Howard, in the true spirit of modern businessmen who are unwilling to admit any wrong-doing, states that other companies also took the military for a ride.

The Aviator is the best film Scorsese has made in years, a movie for our times when the rich are famous, powerful, and accustomed to having things go their way. Millionaires get elected to political office, the public swoons over lists of the richest people in Hollywood, and Donald Trump has his own television show to give millions of viewers a chance to see his business acumen in operation. All of these factors, along with the tour de force performance of Leonardo DiCaprio, will bring large numbers of curious people to the movie theater. After all, Americans worship power, and The Aviator gives them plenty to ponder. 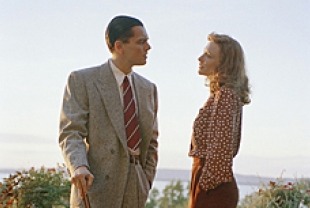 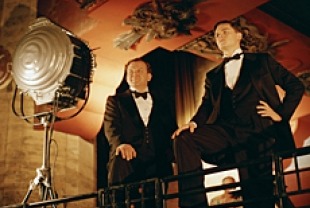 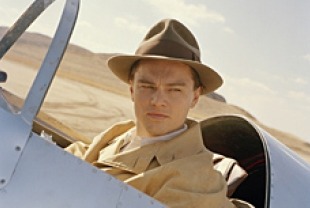