Directed by Christophe Barratier
A heart-warming French film about a kind and gifted music teacher who makes a difference in the lives of his students in a boy's reformatory.

Clement Mathieu (Gerard Jugnot), a teacher and amateur musician, arrives at a run-down boarding school for troubled boys in 1949 already feeling like a failure. This middle-aged man has mixed feelings about how long he can last as a supervisor for 60 boys. Rachin (Francois Berleand), the headmaster, is another frustrated man who takes out his disappointments by administering harsh punishments to the unruly students.

Mathieu makes friends with the janitor by convincing the boy who injured him in a prank to look after him when he is required to rest in bed. Finding out that some of the boys can sing, he holds auditions for a choir and begins rehearsals of some musical pieces he has written. Pierre Morhange (Jean-Baptiste Maunier), known in the school as a trouble-maker despite his angelic face, finds that he has a great talent for singing. Mathieu coaxes him into the choir, which lifts the spirits of his single mom Violet (Marie Bunel) who works in a restaurant and worries about him constantly.

Mathieu turns out to have a nurturing capacity as well. Pepinot (Maxence Perrin) is a lonely orphan who is treated poorly by the other boys. His teacher makes him feel special by giving him the attention and affection he yearns for. Mathieu is less successful dealing with a surly delinquent who is assigned to the school.

Les Choristes has been a huge box-office hit in France and has been selected as the French entry in the Academy Awards for Best Foreign Language Film. The inspiration for the drama is Jean Dreville's La Cage aux rossignois (released in the United States in 1947 as A Cage of Nightingales). In his debut as a film director, Christophe Barratier has fashioned a heart-warming tale about the healing power of music and the big difference that good teachers can make in the lives of their students. The original music used in the film and sung by the boy's choir is composed by Bruno Coulais and Barratier. 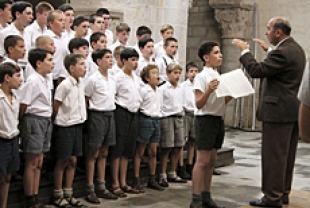 PG-13 - some language/sexual references and violence