Directed by Oliver Hirshbiegel
A sobering film that charts the last 10 days in the life of Adolf Hitler.

What kind of man was Adolf Hitler, the charismatic speaker who inspired such loyalty and yet was filled with the most vile hatred of Jews and a deep disrespect for weakness in any other human being. Albert Speer, the author of Inside the Third Reich and one of the main characters in this riveting German film directed by Oliver Hirshbiegel, once said that he never knew which Hitler was going to greet him when he opened the door. That is certainly true in this drama which covers that last ten days of the Fuehrer's life, beginning with his fifty-sixth birthday on April 20, 1945, and ending with his suicide on April 30. It is based the book Inside Hitler's Bunker: The Last Days of the Third Reich by Joachim Fest and the memoir Until the Final Hour: Hitler's Last Secretary by Traudl Junge and Melissa Muller.

In the middle of a night in 1942, 22-year-old Traudl Junge (Alexandra Maria Lara) from Munich is ushered to Wolf's Lair, Hitler's headquarters in Eastern Prussia. This eager young woman from Munich is chosen to be his secretary. Three years later, Hitler (Bruno Ganz) has retreated to a bunker system underneath the German Chancellery. The Russian army is slowly taking over Berlin and their artillery fire rocks the bunker. Even the most fervid Nazis are sensing that the end of their reign of power is imminent.

The most impressive aspect of this well-done film is its insights into what politicians have called "the bunker mentality." Isolated from others and given to visions of grandeur, Hitler refuses to take seriously that his military machine has failed. He pins medals on the chests of young boys from Hitler Youth who have fought courageously against the Russians. In fits of rage, he lashes out at his generals and when paranoia overtakes him, he becomes convinced that Heinrich Himmler (Ulrich Noethen), the Minister of the Interior, has betrayed him and must be executed. Josef Goebbels (Ulrich Matthes) feeds the Fuehrer's delusions that the war can still be won. The only voice of reason in the inner circle is that of Albert Speer (Heino Ferch), his Minister of Armaments and personal architect, who advises Hitler to leave Berlin and save the civilians from destruction by the Allied armies. The Fueher heaps scorn on the German people for their weakness.

It is astonishing to see the intense loyalty to Hitler demonstrated by so many in the bunker, including Traudl Junge; Goebbels' wife Magda (Corinna Harfouch), who is such a believer in the Third Reich that she is willing to poison her six children and then die alongside her husband; and Gunsche (Gotz Otto), a personal adjutant who carries out Hitler's request to have his body and that of his wife, Eva Braun (Juliane Kohler), incinerated.

Historian William Shirer calls Hitler "the last of the great adventurer-conquerors in the tradition of Alexander, Caesar, and Napoleon." Alan Bullock notes that it was the Fuehrer's "lack of anything to justify the suffering he caused . . . which makes Hitler both so repellent and so barren a figure." John Toland characterizes him as "a hybrid of Prometheus and Lucifer." Joachim C. Fest concludes, "In retrospect his life seems a steady unfolding of tremendous energy. Its affects were vast, the terror it spread enormous; but when it was all over there was little left for the memory to hold." A little bit of the truth in each of these characterizations of Hitler is carried into our consciousness by the acting of Bruno Ganz, who remains one of the great actors of the world.

DVD special features include a featurette on the making of the film, interviews with the cast and crew, and a commentary by the director. 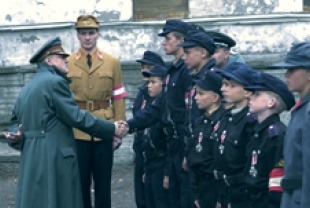