The Other Side of the Street

Directed by Marcos Bernstein
An unusual Brazilian drama that shows it's never too late to move beyond the barriers of class, fear, and habit for the prize of love.

Regina (Fernanda Montenegro) is a lonely sixty-five-year-old woman who lives in a small apartment in Copacabana, Brazil, with her beloved dog Betina. Although she regularly sees her grandson, she is estranged from her son who has given her ex-husband a place to live. With nothing much to do, Regina has volunteered for the police department's neighborhood watch program and takes great pride in having recently helped to break up a child prostitution ring. Her code name is Snow White, and she takes her crime-fighting efforts very seriously.

During one of her many sleepless nights, Regina goes to the window and trains her binoculars on the apartment complex across the street. She witnesses an elderly man giving a fatal injection to his wife. She calls her police contact and watches as the authorities arrive. But the man, Camargo (Raul Cortez), is a retired judge who says he was giving his wife her medicine, and the case is immediately thrown out due to his high social standing.

Regina is told that she has gone too far with her accusation, and she is suspended. Convinced she knows what she saw, she decides to do her own detective work to bring Camargo to justice. He notices their chance meetings and asks her out on a date. At first she is very awkward around him, not only because she hasn't been out with a man for a long time but because she is nervous about him as a murder suspect. Slowly Camargo reveals the details about his marriage and the strain on their relationship due to his wife's cancer. He admits that he, too, is alienated from his child; his daughter cannot accept that her mother refused treatment.

Marcos Bernstein was the co-writer of the screenplay for Central Station, which starred Fernanda Montenegro. In his debut as a director, he has created an engaging drama about the transformations that love can bring in its wake. Whereas Camargo makes the leap of faith quite gracefully, Regina is very closed emotionally and used to hiding behind her sarcasm and obsession with seeing things clearly. It is fascinating to see Montenegro slowly draw out this woman's capacity to let go of her rationality and open up to a person she has totally misread and deceived.

The opening scenes of the film convincingly evoke the loneliness of so many elderly people stranded in large cities as they move through the day with rituals designed to cover the emptiness and the tedium of their existence. Regina meets another woman who also helps the police but she is moving and there is no chance for them to really connect. The journey that Regina and Camargo must travel to enjoy the pleasures of love must transcend class and fear and habit. But it is a journey worth all the risks and even the possibility of failure.

The DVD includes a featurette on the making of the film. 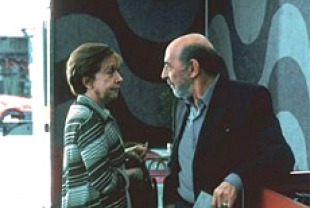