Welcome to the Budapest subway system. In this dark underground world, a scruffy band of ticket agents are employed to maintain order and make sure that customers do not get free rides. Their task is formidable given the variety of men, women, and children who use the system and try to break the rules.

Bulcsu (Sandor Csanyi) is the leader of one inspection squad that includes a young man with narcolepsy, a newcomer who wants to learn the ropes, a rebel without a cause, and an older man who smokes too much. Bulcsu keeps to himself most of the time and, unbeknownst to his co-workers, never leaves the underground system, sleeping on the floor. One day, he bumps into a well-to-do fellow who wonders why he left the firm and never completed a major project that he had started. It is obvious Bulcsu has dropped out and gone into hiding with this job.

Co-writer and director Nimrod Antal has fashioned a wild and weird film that presents a picture of human nature at its worst. This exploration of the shadow works well and is creatively rendered. The inspectors are hated by everyone and given a hard time by tourists, pimps, ill-tempered individuals, drunks, bums, and a variety of others, including one woman who puts a curse on an inspector by blowing powder in his face. Of course, the inspectors themselves feel powerless in the face of their oppressive bosses who monitor their activities on cameras set up throughout the subway system. So they lord it over the customers by harassing them and making them feel small. It is not a pretty picture but a fairly typical one. A prankster called Bootsie (Bence Matyassy) gets his kicks by spraying foam in the inspectors' faces.

Gonzo (Balazs Lazar), who is a favorite of the bosses, doesn't take too kindly to Bulcsu, who has no interest in promotion. This nasty fellow challenges him to a game of "railing" where they run behind one train and try to outrun the Midnight Express which is right behind it. The loser often never runs again. Bulcsu has a few moments of enjoyment with Bela (Lajos Kovacs), a friendly conductor who tells him the worst joke he's ever heard. Perhaps the biggest challenge for these subway employees is catching a hooded man who is pushing men and women to their deaths in front of trains entering the stations. The only grace-filled event in Bulcsu's harried existence is meeting Sofie (Eszter Bela), a beautiful young woman whose job requires her to wear a bear suit. She turns out to be Bela's daughter, and her angelic presence in Bulcsu's life is quite enchanting.

Kontroll is a well-done Hungarian black comedy. This not an easy film genre to master but first-time writer and director Nimrod Antal delivers the goods. 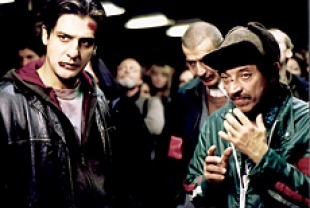