Directed by Lynne Littman
Powerful depiction of the psychological terror that grips a California community after New York and other cities in the East are destroyed by nuclear bombs.

In a small northern California town, Carol Wetherly (Jane Alexander) awakens to another ordinary day. Her husband Tom (William Devane) and oldest son Brad (Ross Harris) are out exercising on their bicycles. Young Scottie (Lukas Haas) is in the kitchen with the television, record player, and radio all on at once. His sister Mary Liz (Roxana Zal) doesn't have time for breakfast. That evening, Carol cannot sleep. She writes in her diary and makes love to Tom, who will go to San Francisco on business in the morning.

The next day starts out like a routine one. The kids are watching television when programming is interrupted by a special bulletin announcing that nuclear bombs have destroyed New York and other cities in the East. Then there is a break in the broadcast as the room turns yellow. Carol and her children huddle together on the floor.

Everything looks the same, but it is not the same. There is a community gathering at the church. Talk turns to radiation fallout; a doctor, minister, and others share their concerns. Henry Abhart (Leon Ames), a ham radio operator, provides the only link to the outside world. There is precious little news. Tom Wetherly has not returned home. Carol misses her mother and fears the worst.

Testament, based on a story by Carol Amen, has been adapted for the screen by John Sacret Young. The drama does not present images of burned or mutilated victims; its concern is with the aftermath of a nuclear holocaust and the psychological effects upon the survivors. It shows in a peripheral way the lack of food supplies, the fantasies some harbor about sanctuary elsewhere, the decay in the community's social fabric, and the numbed psyches of the townsfolk.

There are many avenues by which individuals can approach the subject of nuclear holocaust. This film directed by Lynne Littman was originally presented on PBS's American Playhouse. It offers one view and compels us to imagine — more accurately, to feel in our hearts — what the loss of the future for our children might mean.

The DVD's extras include a feature about a cast reunion titled "Testament at 20"; another revealing through interviews various government and civilian responses to the threat of a nuclear bomb, "Nuclear Thoughts; and a Timeline of the Nuclear Age. 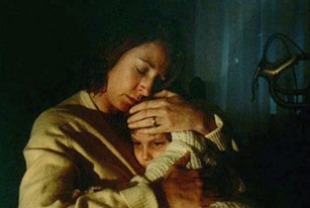