Enron: The Smartest Guys in the Room

Directed by Alex Gibney
An engrossing parable about power, greed, arrogance, and ethical malfeasance on a grand scale.

This riveting documentary by Alex Gibney is based on the best-selling book "The Smartest Guys in the Room" by Fortune magazine reporters Bethany McLean and Peter Elkind. It charts the labyrinthine dimensions of the corporate crime of the century that eventually toppled the seventh-largest business operation in the country. Peter Coyote provides the narration to this parable about greed, arrogance, ethical malfeasance, and power plays whereby Enron morphed from a natural gas pipeline company to a multinational giant. Although the major players in the downfall of Enron declined to be interviewed, Gibney gives us plenty of insights into their leadership style through the use of news footage, corporate audio and video tapes, a comedy skit performed in front of employees, C-Span clips, and much more.

To this day, Kenneth Lay, the son of a Baptist preacher and friend of President George W. Bush (who affectionately calls him "Kenny Boy"), and his hand-picked CEO, Jeffrey Skilling, deny any wrongdoing. In a telling segment, we learn that the latter's favorite book is The Selfish Gene, a Darwinian manifesto that presents a dog-eat-dog version of human nature. Money is the only thing that counts in Skilling's eyes, and his career demonstrates the kind of ruthlessness that comes from such a philosophy. His mark-to-market accounting worked for far too long and gave him the cockiness to believe that anything was possible for Enron since they were "the smartest guys in the room." The documentary alludes to the suicide of Enron executive Cliff Baxter; the magic tricks of CFO Andy Fastow, who made millions for the company through the use of shell companies to cover up Enron's staggering debt; and the escapades of Lou Pai, a right-hand man for Skilling, a mysterious figure with a penchant for strippers.

Hats off to whistleblower Sherron Watkins whose interviews shed light on the inner workings of Enron's corporate culture. Although the callousness and heartlessness of these go-getters are revealed throughout the documentary, the most depressing part is that so many accountants, lawyers, Wall Street traders, investment bank analysts, and government regulators looked the other way for years. They really enabled the corporate corruption of Enron to flourish. They failed to speak the truth in the face of power and as a result, millions of ordinary investors were screwed royally, not to mention the thousands of Enron employees who lost their life savings.

DVD features include: Deleted Scenes; featurettes: "The Making of Enron: The Smartest Guys in the Room," "Enron Company Skits," "Enron Commercials." and "Where Are They Now?" 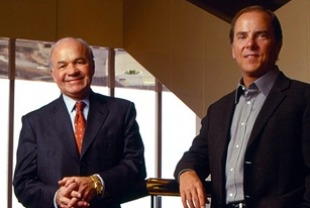