Directed by Susanne Bier
An extraordinary Danish film that explores the primal emotions of sibling rivalry and the toxins of violence released in soldiers in war zones.

Every family assigns children different parts to play and oftentimes these roles are so firmly entrenched that it is hard to change them even though we have become far different people over the years. Few movies deal with this phenomenon as starkly and as convincingly as this extraordinary Danish film directed by Susanne Bier.

Michael (Ulrich Thomsen) is the respectable, hardworking, prosperous son with a beautiful wife, Sarah (Connie Nielsen), and two daughters. Jannik (Nikolaj Lie Kaas) is the black sheep of the family who has just been released from prison for robbery and assault. Michael's take-charge attitude is demonstrated in his ordering his brother to apologize to a woman who was traumatized by him during the robbery. It is this kind of domination that Jannik finds hard to take; he immediately retreats to drinking.

Michael is a major in the Danish Army and has been assigned to duty in Afghanistan with the United Nations forces. At a farewell dinner, Jannik causes trouble and irritates his father, who can’t abide his total irresponsibility. Later, Sarah learns that Michael's helicopter was shot down, and he is presumed dead. She is devastated and has no one to turn to. In her period of grief, Jannik volunteers to fix up her kitchen and to help take care of the girls. It is the first chance he has ever had to bloom, instead of playing second fiddle to his older brother.

Susanne Bier is a skilled director who draws out top-drawer performances from each member of the cast, especially from Connie Nielsen, a Danish-American actress making her debut in a Danish film. Screenplay writer Anders Thomas Jensen not only deals in a substantive way with sibling rivalry but throws in another major theme — how the violence of war can never be left behind.

Instead of dying in the helicopter crash, the slightly wounded Michael is taken prisoner by guerilla fighters who imprison him in a village. There he meets another soldier who has been held for quite some time. This poor fellow is in shock and cannot handle the tension of their confinement. In a horrific scene, Michael is forced at gunpoint by his captors to commit an act of violence that saves his own life but poisons his soul. When he returns home to his wife and family, he is haunted by the darkness of his deed and convinced that Sarah has betrayed him and had sex with Jannik. His daughters suddenly find their father to be a scary man.

The role reversal between the two brothers is played out in scenes that resonate with powerful emotional veracity. Jannik is revealed to be a young man coming into his own as a caring person whereas Michael descends into an abyss of anger and violence. Brothers is one of the best films of the year with its primal exploration of sibling rivalry and the toxins of violence released in soldiers in war zones. 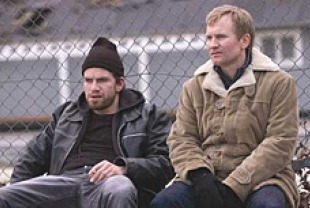