Directed by Paul Haggis
A tense film examining the racial and class divisions in American society that make every stranger into a potential enemy.

In The Cheating Culture, David Callahan writes, "As income differences among Americans have grown larger in recent decades, so have social differences. The enduring correlation between ethnicity and income aggravates the problem, piling ethnic and cultural differences on top of class differences. Looking at each other across the chasms of class and race, many Americans see little reason to believe that they share each other's values — and little reason to trust each other." The end result of this is a divided society where the poisonous effects of intolerance and hatred manifest in everyday interactions between people. Very few filmmakers have dealt with this phenomenon and quite a few movies have even reinforced this lack of trust with their racist characters and coddling of the so-called "Winning Class."

Three cheers for writer Paul Haggis, who adapted the script for Million Dollar Baby and is making his feature film directorial debut with Crash. Over the years, this Emmy-winning writer for such series as thirtysomething, L.A. Law, and EZ Streets has fined tuned his craft as evidenced in this morally rich, nuanced, and poignant drama set in Los Angeles where he has lived for more than 25 years. "My aim with this film," Haggis has written, "is to explore how intolerance is a collective problem. I did not set out to offend or ignite controversy, but to look at many different people, each with his or her unique perspective. Film enables us to walk, however briefly, in the shoes of strangers. In that sense, I hope that Crash succeeds not so much in pointing out differences, but in recognizing our shared humanity." We would add that the film is also about the incivility and conflict that result from living in a fear-based society, where strangers are treated as potential enemies or combatants.

African-Americans Anthony (Chris Ludacris Bridges) and Peter (Larenz Tate) car-jack the SUV of Rick Cabot (Brendan Fraser), the district attorney, and his bigoted wife Jean (Sandra Bullock). She is so unsettled by the experience that she launches into a racist tirade that leaves her baffled husband scratching his head in stupefaction. One of those she demeans in her outburst is Daniel (Michael Pena), a Mexican locksmith who returns home to comfort his young daughter who is frightened. He says he is going to give her an invisible cloak that can protect her from all harm.

Farhad (Shaun Toub), an Iranian immigrant, visits a gun store for a purchase with his daughter (Bahar Soomekh), who has to try to calm down the clerk who is prejudiced against Arabs. When his store is vandalized, this Iranian blames Daniel who told him that the new lock he installed would be no good until he got a new door. When he finds out that the insurance company will not pay anything, he takes matters in his own hands and goes to the locksmith's house with revenge on his mind. What happens in their encounter is astonishing and the most emotionally poignant scene in the film.

Equally memorable, but definitely depressing, is the encounter between Ryan (Matt Dillon), a racist cop, and Cameron (Terrence Howard), an African-American television director, and his wife Christine (Thandie Newton), after he stops them in their Cadillac. His sexual fondling of this well-to-do black woman while searching her for weapons is excruciating for her husband to watch. After finally letting them go, Ryan turns to Thomas (Ryan Phillippe), his rookie partner, and says, 'Wait till you've been on the job a few more years. You think you know who you are; you have no idea." Later, the offensive cop turns out to be a concerned caretaker for his ailing and elderly father who is suffering from a very painful urinary infection.

The final story revolves around Graham Waters (Don Cheadle), a hard-working homicide detective. He takes care of his mother but nothing he does seems to matter to her. Arriving at a scene of an abandoned car, he looks at the body of a teenage African-American boy and recognizes him.

In each of these stories, Haggis and co-screenplay writer Bobby Moresco show the vast barriers of race and class that keep these characters from understanding or even empathizing with each other. It is much easier to vent their frustrations and rage in mindless rants. Yet each character surprises us in the course of the drama, and we realize that no human being deserves to be thrown out of our heart or exiled from our consciousness. Crash is a crash course in unmasking the racial and class divisions in American society that make all strangers into potential enemies.
DVD special features include an audio commentary with Writer/Director Paul Haggis, Deleted Scenes, and a documentary on the making of the film. 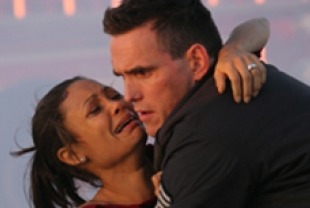 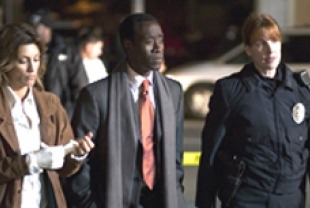 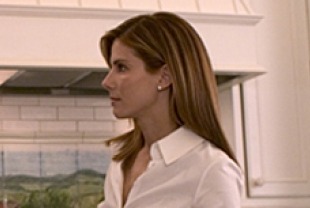 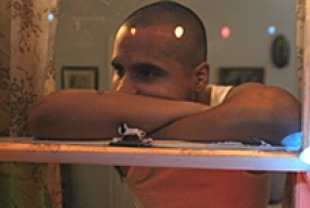