Directed by Gregg Araki
Reveals the pain and suffering wrought by sex offenders who prey upon children.

The influence of a pedophile on two very different boys in the summer of 1981 in Hutchinson, Kansas, is the focus of this hard-edged movie directed by Gregg Araki based on a 1995 novel by Scott Heim. The very graphic sexual content of the story limit its appropriateness to a broad audience, but it's an important film given the prevalence of sexual abuse in the world today. Mysterious Skin joins L.I.E. and The Woodsman as works that cover the shadow elements of adults who prey upon young people and oftentimes shatter their lives in the process. That certainly is the case in this scary tale.

During the summer of 1981, eight-year old Brian (George Webster) is unable to recall what happened to him during a five-hour period. Afterwards, he experienced blackouts, nightmares, and incidents of bedwetting. By the time Brian (Brady Corbet) reaches high school, he is a very shy and awkward teenage whose single-parent mother (Lisa Long) still keeps a close watch over him. On television, he watches a show about UFOs and an interview with Avalyn Friesen (Mary Lynn Rajskub), an adolescent farm girl who claims she was abducted by and experimented on by aliens. When Brian meets her, she encourages him to write down his dreams so that he can clarify what really happened to him during the five hours he cannot account for when he was a kid. Brian's detective work eventually leads him to another boy who was on the same Little League baseball team with him.

That other boy, Neil (Chase Ellison), is the lonely son of a promiscuous mother (Elizaebth Shue), who spends most of her free time in affairs with various men. Already as a young boy he has discovered his attraction to the same sex; however, his best friend is Wendy (Riley McGuire). They share some wild and weird experiences with each other. The high point in Neil's life comes when Coach (Bill Sage) chooses to become his friend and invites him back to his house for fun and games, which he orchestrates for his own sexual pleasures. Neil (Joseph Gordon-Levitt) grows up to be the busiest male hustler in Hutchinson. Wendy (Michelle Trachtenberg) describes him as a person with a black hole for a heart.

She heads off to New York to find work and Neil follows later. Eric (Jeff Licon), their Goth-gay friend, stays behind and eventually befriends Brain when he comes looking for Neil and an explanation of what happened to them when they were eight. The finale of this drama is worth waiting for with its Christmas mood and note of hope.

Joseph Gordon-Levitt does wonders with the self-destructive and cynical character of Neil, finding sides of him that help us empathize with his growing vulnerability in the face of a bleak future. Corbet is equally convincing as the troubled Brian who desperately needs to let go of the burden he has been carrying for far too many years. 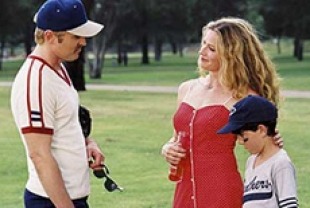