Directed by Hayao Miyazaki
A rousing treatment of caretaking, aging, anti-war sentiments, and the bounties of the heart.

Sophie (voiced by Emily Mortimer) is a shy and diligent 18 year old who works in her family's hat shop. Her charming sister, Lettie (Jena Malone), is concerned that she is missing out on life. One day while walking home, she is stopped by two soldiers who try to impress her with their power and sexuality. When a mysterious and handsome young man comes to her aid, Sophie realizes he is Howl (Christian Bale), a wizard who is rumored to have devoured the hearts of many pretty young women. Attacked by some demons, Howl takes flight with Sophie in tow. After lightly depositing her on a balcony, Howl flies off, leaving her in a state of wonderful shock and joy.

This is just the beginning of Sophie's adventure. Her boring existence is further upended when the Witch of the Waste (Lauren Bacall) arrives in the hat shop and puts a spell on her. The plain adolescent looks in the mirror and sees that she has become a 90-year-old woman. When her mother stops by for a visit, Sophie (Jean Simmons) refuses to let her enter her bedroom, feigning illness. Is there a way out of this predicament? Sophie decides to leave home and seek Howl's help. Thanks to the friendly assistance of a scarecrow she names Turnip (Crispin Freeman), Sophie gains access to Howl's moving castle, a gigantic ramshackle place that plods through the countryside on four webbed feet. With a fierce determination that is unlike her younger self, Sophie insists on becoming Howl's housekeeper. She cleans up a storm and takes under her wings Markl (Josh Hutcherson), the wizard's young apprentice. She must also deal with the alternately funny and feisty antics of the fire-demon Calcifer (Billy Crystal), who has a mysterious relationship with Howl.

Meanwhile, the King has instituted a drafted all the wizards to fight in a meaningless war. Howl refuses to report. Instead, he asks Sophie to go to the palace, claim she is his mother, and plead his case. He promises to accompany her in a disguise, and looking behind her in the vicinity of the royal abode, Sophie sees a small dog that has a wheezing bark. She is also surprised to see the Witch of the Waste, who has also been summoned. The two aged women huff and puff up the endless steps to the palace, each wondering what lies in store for them. The person in charge is Madame Suliman (Blythe Danner), the Royal Wizard of Kingsbury and the King's head sorceress. She has a nasty surprise for the Witch of the Waste and plenty of information to give Sophie about why Howl does not want to participate in the war effort.

Oh, what a pleasure to experience another animated masterwork by Hayao Miyazaki, the Japanese director who also was behind the 2002 Academy Award winning animated film Spirited Away. His films always have a spiritual perspective. In this one, based on a novel by Diana Wynne Jones, there is no simplistic division of the world into good guys and bad guys, no "us" versus "them" battles in which we cheer for the heroes and hiss when the villains appear on the screen. Humans, demons, sorcerers, and witches all demonstrate moments of goodness, selfishness, and folly. For this achievement alone, Miyazaki deserves to be commended for advancing the cause of a mystical appreciation of our connections with all others, no matter how strange or unappealing they seem at first. No one can be cast out of our hearts. For example, in one of the most daring developments in the story, the elderly Sophie volunteers to look after the vanquished Witch of the Waste, the same one who put her under a spell.

A second admirable motif in this drama is that being old is not a terrible and unappealing fate. This is almost never seen in films made in the West where youth is worshipped and elders are treated as invisible men and women. After Sophie is transformed into an old woman, she is at first stunned by this staggering change in her appearance. But then she learns to relax into her new persona. This Sophie is an improved version of the youngster, who was shy, frightened of challenges, and lacking in both energy and self-confidence. Sophie, the elder, embarks on an adventure that takes her into a world far beyond anything she could have imagined before. Working as Howl's housekeeper, she has more energy and fulfillment than ever. Sophie the elder is not afraid to adapt to all the changes in her life nor does she have any doubts about speaking her mind. Myazaki shows that this character's face is young when she sleeps but while she is working to save Howl, hers is a face of embodied wisdom, showing the marks of experience. Howl's Moving Castle is probably the first animated feature ever to let a crone carry the day with the ardor of her love and caring spirit.

A third theme of Howl's Moving Castle is its anti-war message and its affirmation of the heart. The wizard shows Sophie an old mill house where he spent much of his childhood. This beautiful rustic setting replete with a glorious lake is in stark contrast to the fast-paced city where Sophie lives. There the dark black clouds of smoke from the trains fill the air with pollution. But the most toxic thing of all is war itself with destructive battles going on in the air and on the land. Howl is transformed into a great birdlike warrior as he tries to put an end to conflict.

Both Howl and Sophie learn a lesson that has been stated well by the great Buddhist master Chogyam Trungpa: "Real fearlessness is the product of our tenderness. It comes from letting the world tickle your raw and beautiful heart." Howl's Moving Castle is one of the best films of the year. 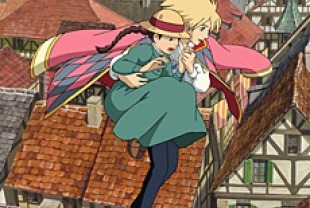 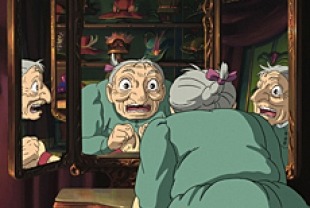 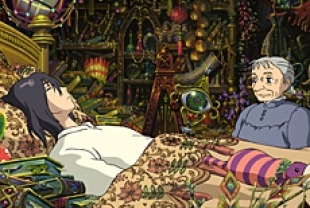